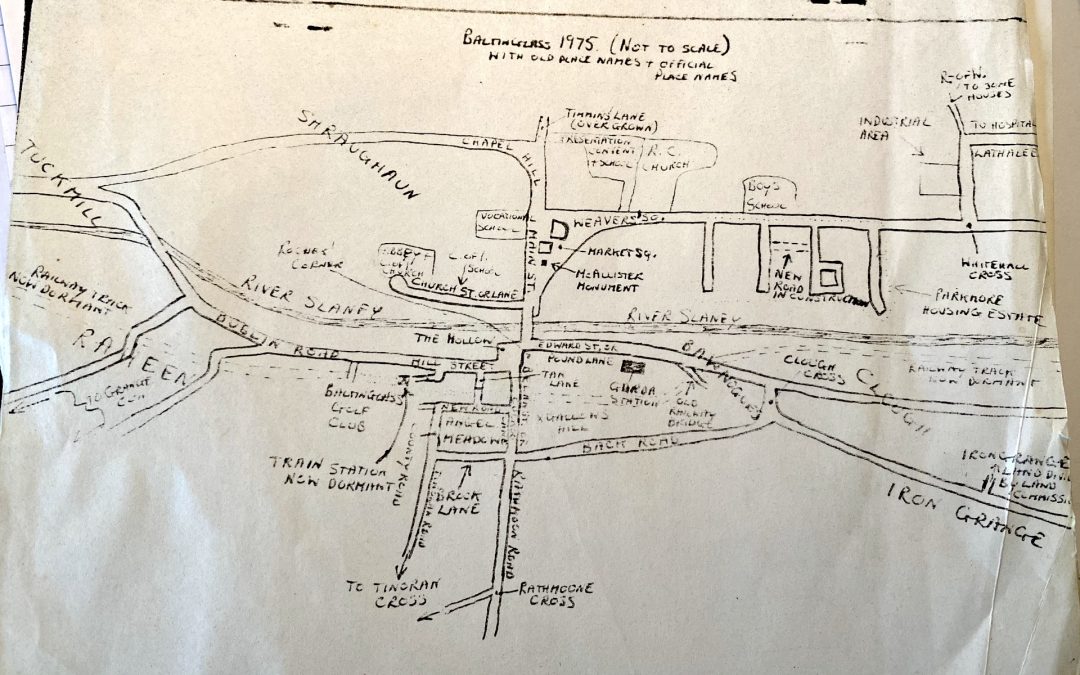 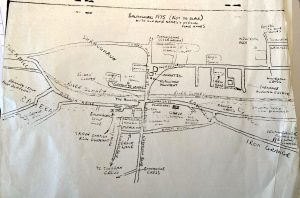 Today (11 March 2022) my friend Cora Crampton showed me a photograph of a sheet of paper – the one in the image here.  It was in the back of a copy of Claude Chavasse’s The Story of Baltinglass (1970) which I gave her (or so she says) several years ago.  She recognised the dreadful printed place-names on it as my ‘writing’.  So did I, but I have no recollection of even seeing it before.

If you look closely at this hand-drawn map of the town of Baltinglass you’ll be able to make out some of the faded and fading names.  It’s headed:

This ancient manuscript was created by my 16 year old self, close on half a century ago. I was viewing it today as something newly discovered!  It was as if a stranger had drawn it, but as I looked closer at this ‘treasure’, as Cora called it, I recognised that its creator and I were one and the same.

Some of the old place-names I highlighted (some not very visible to the unfamiliar eye) were The Hollow, Roche’s Corner, Gallows Hill and Angel Meadow.  As Cora noted, Baltinglass has changed quite a lot since 1975.  The Kiltegan Road is greatly altered.  Scoil Chonglais is now beside the ‘Boys School’, which has become Scoil Naoimh Iósaf.  Ardglass, Lathaleere / Pine Grove, Deerpark View, Allendale, Whitehall Park and West Demesne have all sprung up.  The ‘Industrial Area’ has been extended into Europark.  In Parkmore the ‘new road under construction’ is now a very mature part of the estate.

When I was a small child playing at the top of Church Lane, Canon Chavasse often passed up from the Rectory in his Morris Minor. After he retired and left Baltinglass he published his book, the first history of our town ever written.  I thought it was a complete wonder. It gave me my first real glimpse into the past of my town and its environs. Local history and genealogy had become my obsession long before my 16 year old self sketched this map in 1975.  I doubt that at the time I ever thought that 31 years later I would publish my own book on the town – Baltinglass Chronicles 1851-2001 (2006).  It was a major honour for me to follow in the footsteps of Claude Chavasse.

Seeing this map reminded me why I love my native place. Neither of my parents were born here but they spent all their married life in the town and grew to be almost native.  They both knew quite a lot about Baltinglass past. They respected the town’s traditions. Their children went juggying at Halloween.  They turned off the lights in the chemist shop and pulled down the blinds when a funeral passed by.  The shop was closed for the half-day on Wednesdays and Dad was able to play golf. I care passionately for Baltinglass – past, present and future.  It’s where I’m from and where I want to be.

Writing this blog I was overwhelmed with nostalgia and I actually cried.  I’m not quite sure why, but I did anyway. Maybe it was a combination of memories old and recent.  This map was a great gift – a treasure indeed.  Thank you Cora.