My Name is Aloysius 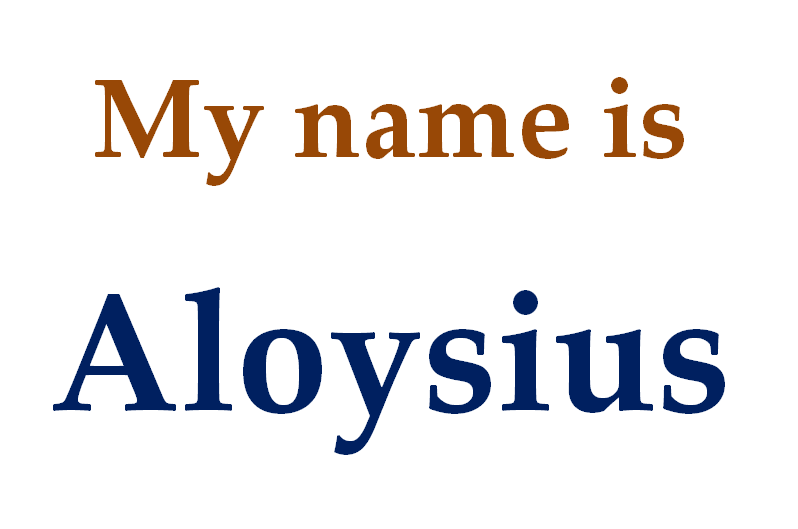 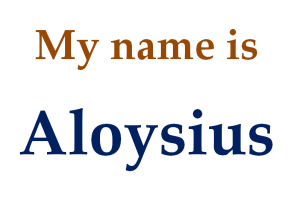 My second forename is Aloysius.  Throughout my childhood, youth and middle age I kept it hidden from most people.  I was embarrassed by it and I wasn’t a bit happy that my parents thought to lumber me with such an oddity.  It took decades for me to come to terms with it, or almost come to terms with it. Now I wear it almost with pride.

For people unfamiliar with Aloysius, it is pronounced ‘Al-oh-ish-us’.  It is a Latinised version of Aloys, the Provençal form of Louis, which is ultimately of Teutonic origin.  The person in whose honour it was used in Roman Catholic countries was Aloysius Gonzaga (1568-1591).  He was a Jesuit novice, born in the Italian duchy of Mantua, who died at the age of 23.  He was canonised in 1726 and 21 June, the date of his death, was declared his feast day.  Aloysius is not an unfamiliar name in all parts of Ireland.  For instance, St. Aloysius’s name is given to a church in Breaffy, Co. Mayo, schools in The Lough and Carrigtwohill in Cork, and a ward in Dublin’s Mater Hospital.

Part of the reason I wear the name almost with pride is that it was also my father’s second forename. I have always believed that in this regard I was called after him.  As I write this it just occurs to me that there may have been an additional reason why I was given the name.  My maternal grandmother’s brother was Michael Aloysius Nolan.  He died in a drowning accident in 1897 at the age of 20.  His photograph hung in the McDermott household and I always knew his tragic story. My uncle, Michael Aloysius McDermott inherited his name.

It happens that my birth date was the anniversary of my granduncle, Michael Nolan’s death.  For that reason, my mother may have been lightly influenced by her mother to include Aloysius in my name. If this was the case I was never told about it. As my mother was slightly superstitious about names, I somehow doubt this possibility, but it’s quite a coincidence.

The use of forenames in Ireland is a subject that has interested me for many years.  I’m not talking about the origin and etymology of names, though they too have their fascination.  What I like in particular are the geographical, religious and social influences on the use of forenames in Ireland. Indeed the micro-etymology involved in pseudo-translation of Gaelic names and Gaelicisation of Norman and English names is a wonderful subject.  My research on forenames used in Ireland is very slowly (very, very slowly) working its way towards publication as a guide for family historians.

The earliest definite reference I found to the name Aloysius in Ireland related to the probate of the will of Rev. Thomas Aloysius Hennessy, Parish Priest of Clonmel, in 1752.  Evidently he adopted it as a second forename in adult life, as his will was proved just 26 years after the canonisation.  It seems likely that many of the early nineteenth century instances of Aloysius as a second forename were taken on in adulthood rather than being given at baptism.

Aloysius was also occasionally given to girls as a secondary forename, while Aloysia was also used as a female version.  In the latter half of the nineteenth century Aloysius became quite popular among Irish Roman Catholics for boys, but primarily as a secondary forename.  It was used well into the twentieth century, but its popularity waned about mid-century.

Perhaps the most famous Aloysius in the world, due to the 1981 television adaptation of the novel, was Lord Sebastian Flyte’s teddy bear in Evelyn Waugh’s Brideshead Revisited.  As for Irish humans of the name, the most noticeable was the artist Aloysius O’Kelly (b. 1853). However, there were others who could hide it. The writer James Joyce (b. 1882) had it as his third forename, while it was reduced to an initial by John A. Costello (b. 1891), who was twice Taoiseach.

As I mentioned above, Aloysius’s popularity in Ireland diminished in the mid-twentieth century. I am the youngest Aloysius I know of, which makes me something of a dinosaur’s tail in the twenty-first century – a remnant of a fashion in forenames that lasted a few centuries.