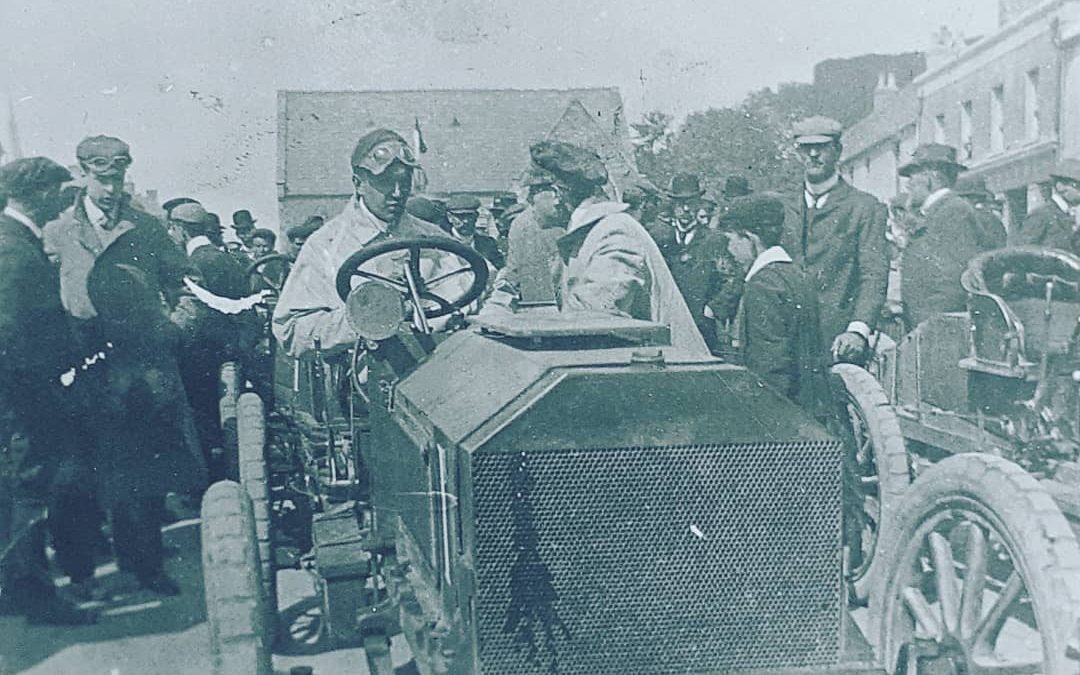 Gordon Bennett !!!  This photograph was taken on Wednesday 1 July 1903 in South Main Street, Naas, Co. Kildare. What was happening was the weighing of the cars for the 4th Gordon Bennett Cup Race, the first to be held outside of France. The race took place the following day, but away from Naas. The photograph was taken by Joseph Gorry, a 25 year old pharmaceutical chemist who had opened his business at 54B South Main Street just 11 months before. He took the lease of 54A a few years later and the merged No. 54 was to remain as a Gorry family home until 2011, when the last of his children died. Joe Gorry was my grandfather. The following Saturday, the Kildare Observer newspaper reported on the exciting scene in the centre of Naas. The cars were slow to arrive at the weighing spot but then came together.

The continentals were the most punctual, and before the fixed hour, the Germans and Frenchmen had their racing machines in Naas. The English contestants were tardy, and they were followed by the Americans. The enormous show in Naas – a show which was never seen before, and in all probability will be never seen again in this town, was enough ‘to stagger humanity.’ The sight of a flying monster of human ingenuity and built by skilled human hands, coming at break-neck speed, and coming to a standstill on the momentary clutch of a lever, is startling. The Town Hall yard was pretty full by 11.30 o’clock, and there was a plentiful supply of what seemed to be ordinary paraffin oil, but which on inquiry was found to be petrol, the fluid which develops the energy sufficient to carry these locomotives eighty and ninety miles an hour. It was many hours after the weighing-in before Naas resumed its normal appearance, and then it was only for a short spell. Away for the rehearsal over the course went the motor racers and their followers, and visitors generally hung about for a short while before flitting to Dublin or elsewhere … Later on, the streets of Naas once more became thronged, and from 10 p.m. to 5 a.m. on Thursday morning a veritable torrent of vehicles, horseless and otherwise, poured through the town.