Rex Ingram, the Irishman who put the Valentino into Romance 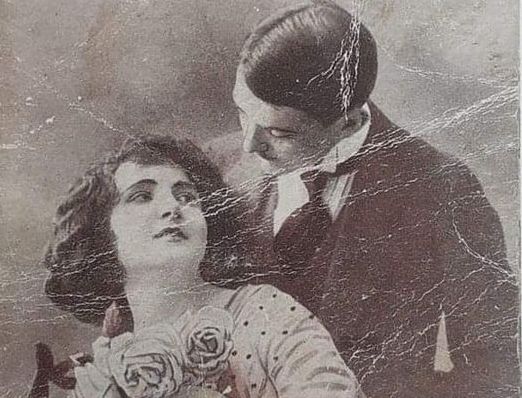 It’s now exactly a hundred years since the name Valentino was first noticed by cinema audiences and became synonymous with romance.  On 6 March 1921 the silent motion picture The Four Horsemen of the Apocalypse had its first public showing at the Lyric Theatre in New York.  Twenty-five year old Rudolph Valentino and twenty year old Alice Terry had the leading roles, while the future Oscar winner Wallace Beery was in the supporting cast.

Valentino had been in films for seven years by that time, but only as an extra, a dancer, a bit part player or a supporting actor.  The Four Horsemen was his breakthrough role.  There are competing stories as to who ‘discovered’ Valentino, whether it was the film’s twenty-eight year old director, Rex Ingram, or the screenwriter June Mathis.  Either way, they both were responsible for the film that launched a legend.  Mathis was an influential woman in Hollywood, and more so after the success of The Four Horsemen.

The picture was an instant and huge hit.  The famous tango in an early scene contributed enormously to Valentino’s appeal for swooning women and the film raked in a fortune for Metro Pictures.  But this remembrance of the centenary of The Four Horsemen of the Apocalypse is not all about Valentino.  Instead, it shines a light on Rex Ingram and his future wife, the other star, Alice Terry.

Decades before Oscar nominations for direction came the way of Kenneth Branagh, Jim Sheridan, Neil Jordan and Lenny Abrahamson, Hollywood had another Irishman at its heart.  Rex Ingram was not an American of Irish parents (like John Ford); he was not someone born in Ireland and raised elsewhere (like Herbert Brenon); he was Irish born and bred.  Ingram was born in Grosvenor Square, Rathmines, in Dublin in January 1893.  He grew up in Dublin, Nenagh, Borrisokane and Kinnitty.  He was living with his father in Kinnitty at the time of the 1911 Census, when he described himself as an artist.  He was eighteen years old then.  A few months later he boarded the ship ‘Celtic’ at Queenstown and on 2 July 1911 arrived in New York.  On the passenger list he again was described as an artist.  He was 5 feet 11 inches in height, with brown hair and grey eyes.

During the first two decades of his life his surname was not Ingram.  He was born Reginald Ingram Montgomery Hitchcock.  Reginald was popularly shortened to Rex.  As Rex Hitchcock, he became involved in the film business in New York, as an actor and general dogs body for Edison Studios.  In 1914 he moved to Vitagraph and the following year he joined the newly formed Fox Film Corporation as part of the writing and directing staff.  His first work with the new company was on the film Should a Mother Tell? when he was credited for scenario.  It was at that point that he started using his mother’s maiden surname, becoming Rex Ingram.

Why he decided in 1915 to change his name is unclear.  It is doubtful that it had anything to do with saving the blushes of his clergyman father, as his father had been to the cinema to watch one of the Vitagraph productions Rex had acted in.  Apparently in the late 1920s Rex advised a young director named Alfred Hitchcock to change his surname, as it would spoil his chances of success.  It is somewhat ironic that Rex Ingram was responsible for making Valentino synonymous with romance, while someone else made the surname he abandoned synonymous with suspense.

As for Rex Ingram’s credentials as an Irishman, his parents were Rev. FRANCIS RYAN MONTGOMERY HITCHCOCK (1867-1951), a Church of Ireland minister, and KATHLEEN MARIA INGRAM (1869-1908).  Both were born in Dublin and they married in 1891.

In her book The Archives of the Valuation of Ireland 1830-1865, Frances McGee mentioned the possibility of tracing the careers of staff members through the records and, luckily, used George Hitchcock as an example.  He worked in the Valuation Office from 1839 (beginning as a temporary assistant), rising to divisional superintendent by 1860, and he retired in October 1870 with a pension of £233.  In his will he left effects under £4,000 and the Calendar of Wills and Administrations indicates that he had been engaged in the Town Hall, Blackrock, after his retirement.

Rex’s paternal great-grandparents were JOHN HITCHCOCK , Governor of Clonmel Asylum, and ANNE LOUISA JOHNSTONE (d. 1860).  They married in St. George’s, Dublin, in 1811.  Anne Louisa was the daughter of JAMES JOHNSTONE, of Moffat in Scotland, ‘many years Engineer of the City of Dublin’, and his wife MARIA (d. 1819).

There was a belief in the family at the time of Anne Louisa Hitchcock’s death that her paternal grandfather was the Chevalier de Johnstone, who supposedly was aide-de-camp to Bonnie Prince Charlie.  A cursory online search in relation to him suggests that he was not aide-de-camp to the prince and that he is not known to have had children.

James’s father was JAMES INGRAM, an office clerk.  The younger James trained as a fireman in New York and apparently joined the Dublin service nearly twenty years before his death.  The Ingram family lived up until his death at 58 South William Street, where their daughter Kathleen was born.  That large building had been the City Assembly and at that time it had various corporation uses, including being Fire Station No. 1 and home to the Ingrams.  In the latter half of the twentieth century it housed the Dublin Civic Museum.  Today it is the home of the Irish Georgian Society.

This sketch of Rex Ingram’s family background involved several hours’ research, limited to online sources due to Covid.  Its initial stages were greatly assisted by Liam O’Leary’s 1980 biography Rex Ingram: Master of the Silent Cinema.  O’Leary dedicated the book to Alice Terry, from whom he obtained great assistance.  Rex and Alice married in Pasadena in November 1921, eight months after The Four Horsemen made her a star, and while they were making The Prisoner of Zenda.

As with so many film people, Alice’s surname was altered too.  Until 1919 or 1920 she acted under her real name, Alice Taaffe.  As O’Leary stated, she was born in Indiana in July 1900.  O’Leary gave her father’s name as Martin and said that he was a farmer from Co. Kildare in Ireland.  This was inaccurate.  Her parents were MATTHEW TAAFFE (b. c1867) who was born in Illinois to Irish parents, and ELLA THORN who was born in Indiana.  Matthew described himself as a barber in the 1900 US Federal Census.  He died in Los Angeles in February 1907, when Alice was only six.

O’Leary’s book shows that Rex Ingram directed 27 films between 1916 and 1932.  Alice Terry appeared in 14 of them.  The Four Horsemen made a superstar of Rudolph Valentino and a less brightly burning star of Alice Terry, but it also elevated Ingram into a more influential sphere.  He launched the career of Ramon Novarro in The Prisoner of Zenda and directed him in a further four pictures.  Moreover, Rex was praised for his artistry by filmmakers such as Michael Powell and David Lean.  Rex Ingram died in hospital in North Hollywood, California, on 21 July 1950, aged 57.  He is not as celebrated in his homeland as he deserves.

[The image accompanying this story is not of Rex and Alice.  It is taken from a generic postcard of the period that has a verse about ‘Constancy’ and a heading to relate it to a specific place.  In this case it is ‘FROM BALTINGLASS’.]