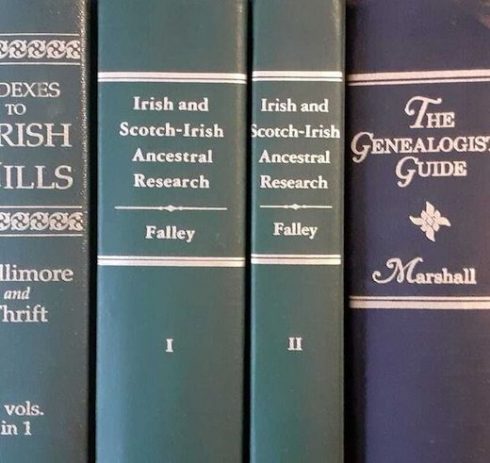 ​Margaret Dickson Falley’s publication, Irish and Scotch-Irish Ancestral Research, is remarkable, yet the vast majority of people now pursuing Irish genealogical research have never heard of it.  The most remarkable thing about Falley’s two-volume work is that it was written remotely in the USA, long before fax, email and the internet made information gathering so much easier.  The only book available on the subject at that time was Rev. Wallace Clare’s slim A Simple Guide to Irish Genealogy, published in 1937. 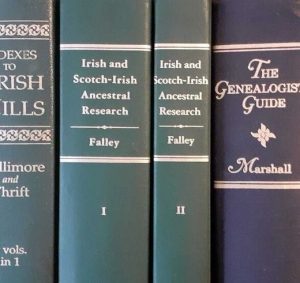 Over 60 years ago Mrs. Falley made three extended research trips to Ireland and followed up with correspondence, as well as accumulating ‘a private library of historical and genealogical source materials of over two thousand volumes’.  What she produced was a work of extraordinary detail that would be extremely difficult to compile with the aid of all of today’s advancements in technology.

Margaret Falley (1898-1983) was already a highly regarded genealogist before she turned her attention to Ireland.  A year after she embarked on her Irish crusade she was elected the 64th Fellow of the American Society of Genealogists (ASG), an exclusive organisation limited to fifty individuals at any given time.  Individuals are selected for membership, or ‘Fellowship’, based on ‘the excellence and volume of their published works that would demonstrate ability to discover facts from original source material and to evaluate and present evidence’.  She was the tenth woman to be so honoured.  She served as Vice President of ASG in 1961-1963.

Mrs. Falley paid her first research visit to Ireland in 1951, making initial contact with the men (as all were men at that time) in charge of the Public Record Office of Northern Ireland, the Presbyterian Historical Society, the National Library of Ireland, the Genealogical Office, the Registry of Deeds and the Public Record Office [of Ireland], as well as the Keeper of Manuscripts at the British Museum.  Over the following decade she gained a remarkable knowledge of all types of genealogical records to do with Ireland.  Her magnum opus was published in 1962.

‘Falley’ is a source that any serious Irish genealogist should have to hand.  It may not need to be used too often but, when troublesome fine points appear in a search involving records beyond the basics, it is often the source to which you might turn.  It is so packed full of information that it can be hard to use.  Often delving into it is like falling down a rabbit hole or getting lost in a labyrinth, but the journey is always worth it.

In 1980 Margaret Falley donated her books and microfilms of Irish records to Northwestern University Library in Evanston, Illinois.  She died on 10 July 1983.  In 1991 her personal research papers were donated to the same institution by her daughter.  Her remarkable Irish and Scotch-Irish Ancestral Research was reprinted a number of times by the Genealogical Publishing Company in Baltimore, beginning in 1981.