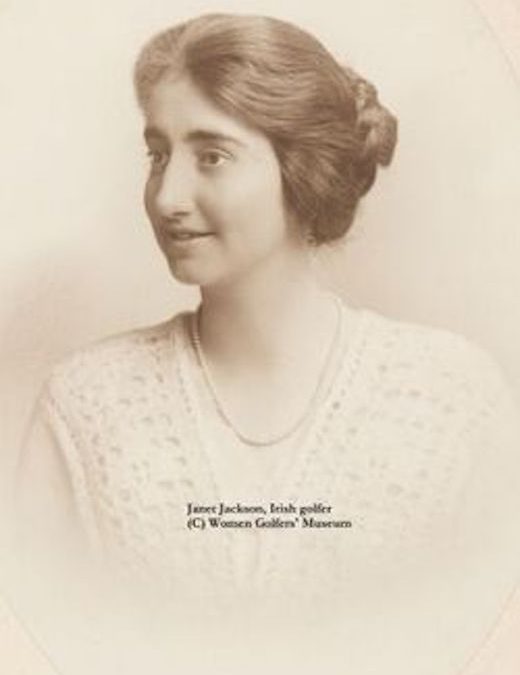 The story of armed conflict often dominates and clouds our perception of the past.  When we read about a time of war it seems as if nothing but war was happening: as if normal life was suspended while shooting and killing were all pervasive.  The Great War of 1914-1918 was an armed conflict that impacted on people’s lives all over the globe.  It finished in November 1918 and in Ireland two months later the War of Independence began.  It lasted until July 1921.

After the Great War competitive and championship golf resumed in many parts of the world during 1919, even as the global influenza pandemic burned itself out.  The three Irish national championships (ladies’, men’s amateur and professional – won by Janet Jackson, Ernest Carter and Pat O’Hare), as well as the Irish Amateur Open (won by Carl Bretherton of England), all took place in 1919, despite the added obstacle of the War of Independence.

One of the casualties of the Great War was Michael Moran, who died in 1918, aged 32.  Before the conflict he was Ireland’s leading professional, and he tied for third place in The Open Championship in 1913.  As a memorial, the golf clubs of the province of Leinster presented a trophy to be competed for among professionals, originally only those from Leinster.  The first staging of the Moran Cup was at Hermitage, Co. Dublin, on 5-7 May 1920.  It was a match-play event and the winner was Moses O’Neill, who beat Fred Smyth at the first extra hole in the 36-hole final.

The (British) Ladies’ Championship was resumed only in 1920.  It was to take place in 1919 but it was abandoned: not due to influenza, but because of the nine-day national railway strike in September-October.  The 1920 championship was played in mid-May at Royal Co. Down, Newcastle.  Cecil Leitch, then widely regarded as the greatest lady golfer, came to Newcastle as the reigning British, French and English champion.

1920 was the sixth time the championship was played in Ireland and the third time it was played at Newcastle.  On both previous occasions, 1899 and 1907, the finals were played between two Irish competitors.  On this occasion two Irish ladies reached the quarter-finals.  They were Marion Alexander and the Irish Close champion, Janet Jackson.  Alexander lost at that stage, but Jackson beat Phyllis Lobett from England by 8/6.  Her semi-final was a close run affair against another English player, Molly Griffiths, but Jackson lost by one hole.  It was her second time to reach that stage in the championship.  In the final Cecil Leitch came through again to win her second of four British titles.

The Open Championship did not restart until 30 June 1920, when play commenced at Royal Cinque Ports in Kent.  No Irish competitor featured on the last day, and it is doubtful that there was any Irishman in the field.  Across the Atlantic in August 1920 the other ‘Major’ of professional golf, the US Open, took place at Inverness in Toledo, Ohio.  Three Irishmen completed all four rounds.  Gene McCarthy, a long-time resident of the USA, finished in 67th place.  Pat Doyle, from Delgany in Co. Wicklow, was joint 43rd.  The best of the Irish was Peter O’Hare, one of three golfing brothers from Greenore, Co. Louth.  He finished tied for 27th position, 15 shots behind the winner, Ted Ray.  For whatever reason, the O’Hare brothers were referred to consistently as O’Hara in America.

Days after the US Open finished, the US PGA Championship (not yet quite the ‘Major’ it subsequently became) commenced at Flossmoor in Chicago.  At that time it was a match-play event, with 32 players qualifying to compete after 36 holes of stroke-play.  Among the 32 qualifiers were four Irish competitors – Tom Boyd, originally from Armagh, Pat Doyle and the ‘O’Hara’ brothers, Pat and Peter.  Each match in each round was over 36 holes.  All but Peter O’Hare went out in the first round, Peter beating Pat Doyle by 1 hole, while Pat O’Hare was defeated by the same margin by the eventual runner-up, Douglas Edgar.  Peter got to the quarter-finals, where he was beaten on the 38th hole by George McLean.

Meanwhile, back in Ireland in May, the Irish Professional Championship had been played at Castlerock as a sort of preamble to the Irish Amateur Close.  The professional title was not defended by the holder as he was Pat O’Hare, who was competing in the USA by that time.  He was replaced as Irish champion by the third O’Hare brother, Jimmy, who won in the first ever play-off in the event.  Jimmy O’Hare and Harry Hamill finished in a tie on 315 for the 72-hole championship.  The next day their 18-hole play-off resulted in a 3 shot win for O’Hare.  Jimmy O’Hare was professional at Skerries Golf Club, Co. Dublin, at the time.  Three months after his win, the Skerries clubhouse was burned to the ground and the championship cup was destroyed.  This does not seem to have been linked to the War of Independence.

The Irish Close championship that followed the professional one, at the same venue, was won by Charles Hezlet, who had been runner-up in The Amateur Championship at Sandwich in 1914, not long before war was declared.  As a British Army officer, Hezlet spent the next several years as a soldier and he was only slowly returning to competitive golf by 1920.  At this point this article veers in the direction of self-indulgence, with mention of the writer’s grandfather, Joe Gorry.  He reached the Irish Close quarter-finals, where he was beaten 3/2 by Hezlet.  Referring to Charles Hezlet, the Belfast Newsletter of 1 June 1920 stated:

In his earlier matches the opposition was not very serious, but on the Wednesday he ran up against Gorry, of Kildare, who, as all are aware, is a very hard man to beat.  On this occasion Hezlet played better golf than before, and Gorry, in his anxiety to leave nothing to chance, practically beat himself by the elaborate and, as many thought, the unnecessary care he took over every shot.

The Amateur Championship returned from hibernation in early June 1920, at Muirfield, near Edinburgh.  Best of the Irish was Charles Hezlet, who reached the fourth round (last 32), going down to G.L. Mellin, who ended his challenge in the semi-finals.  Also in early June, the Irish Ladies’ Close was played at Royal Portrush and the holder, Janet Jackson of the Island Golf Club, Co. Dublin, retained the title.  This was her fourth in a row, as she had won the title in 1913 and 1914, before the suspension of competition due to the war, and she won it again when competition resumed in 1919.  She was to claim the title twice more, in 1923 and 1925.  Her photograph is reproduced here courtesy of the Women Golfers’ Museum.

The autumn brought the last two big events of the Irish calendar, the Irish Amateur Open and the South of Ireland.  In 1919 the Amateur Open, played at Royal Portrush, had its usual quota of cross-channel competitors, with Carl Bretherton of England winning the final against Tommy Armour, the future professional from Scotland.  The other two semi-finalists also were from England.  The 1920 staging was at Portmarnock, in Co. Dublin.  The field was down from 132 the previous year to 83, and only 16 entered from across the Irish Sea, compared with 57 in 1919.  Bretherton came to defend his title, but he was defeated in the quarter-finals by Noel Martin of Portrush, another Irish veteran of the Great War.  Only one non-Irish player made it to the semi-finals and Martin was the eventual winner.

In another display of self-indulgence, the following was reported on 7 September 1920 in the Irish Independent account of the first round:

One of the disappointments was the moderate form shown by J. Gorry (Kildare), who was 3 down at the turn to J.L. Morgan (Delgany), and was beaten 3 and 2, but it must be said in extenuation of the Kildare man’s form that he was playing with strange clubs, his own having been burnt in the recent fire at the Skerries Club.

The South of Ireland Amateur Championship at Lahinch followed on the heels of the Amateur Open and the victor was Ernest Carter, yet another British Army officer.  His entry in the 1922 Golfer’s Handbook states:

Badly wounded in the war and amputation of a leg was deemed necessary to save his life.  He refused to permit the operation “because with only one leg he would be little use at golf and life would be unbearable”.

Carter’s victory in the 1919 Irish Close is all the more remarkable because of this.  His win in the 1920 South of Ireland final had some War of Independence mischief as a backdrop.  Arthur J. Quinlan’s history of the ‘South’ relates a story told by John Burke.  In 1920 Burke was involved in the armed struggle but in later years he was one of Ireland’s greatest amateur golfers.  He told Quinlan that during the final he and two others removed the Union Jack from the flagpole outside the clubhouse and burned it, replacing it with a Tricolour.

During the politically turbulent times the Irish region of the Professional Golfers Association divided into northern and southern branches.  In September 1920 a stroke tournament for northern professionals was held at Bangor, with Harry Hamill winning the event.  In succeeding years this developed into the Ulster Professional Championship.

Two babies born in 1920 were among those who in later years would make their mark on Irish golf.  In February, Zelie Godfrey was born.  It was under her married name of Fallon that she won the Irish Ladies’ Close in 1964, becoming the oldest ever winner, at 44 years and 94 days.  Philomena Garvey was 67 days younger when she won her last Irish title in 1970.  Zelie Fallon remarried and in later years was better known as Mrs. Gaynor.

In May 1920, Jimmy Bruen came into the world.  He became an amateur golf sensation in the late 1930s but his career was interrupted by World War II and his sparkle had faded by the time he reached his early thirties.  Nevertheless, he won the Boys’ Championship, the Amateur Championship, the Irish Amateur Open and the Irish Close, as well as being leading amateur in The Open.

Despite the overshadowing story of conflict, 1920 in Ireland had an eventful golf calendar, and the beginnings of new growth.