Talbotstown Church – something of a West Wicklow gem 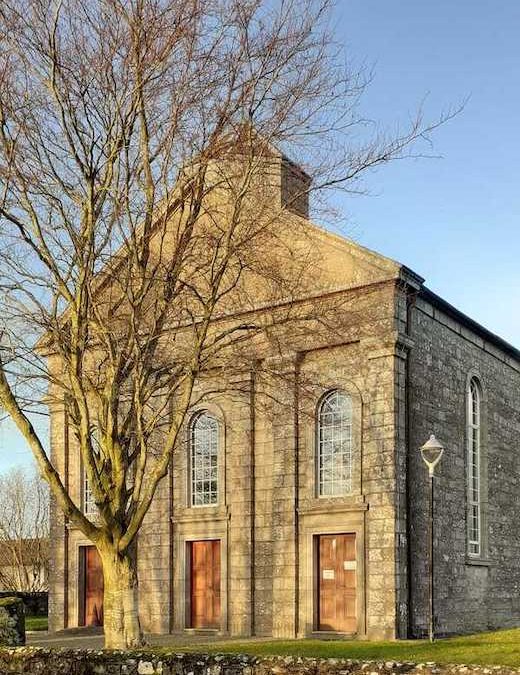 St. Brigid’s Church, Talbotstown, has a really beautiful backdrop, with the twin mountains of Keadeen and Carrig dominating the view.  The small car park beside the church is one of the best vantage points for admiring those mountains and for seeing Finn McCool and his wife resting in the sunshine.  To the left you will see the much smaller Kilranelagh Hill, the site of an old graveyard and the centre of an area with many remains of ancient habitation.  But Talbotstown Church itself has its own beauty and its own history.

It is at the edge of the townland of Talbotstown Upper in Kilranelagh civil parish, but it is an out-church or chapel-of-ease of Rathvilly Roman Catholic parish, which straddles the border between Cos. Carlow and Wicklow.  Talbotstown is proudly in Wicklow, though all this part of the county was part of Carlow (Catherlogh) before Wicklow was invented in 1606.  Until the early years of the twentieth century the word ‘church’ was used only in relation to Church of Ireland places of worship, while those of other denominations were referred to as ‘chapels’.

Writing in the Journal of the County Kildare Archaeological Society in 1905, Charles Drury stated that after the old chapel of Kilranelagh fell into disuse, Mass was said in a chapel in Englishtown.  He quoted one John Magrath as saying that this practice continued for about 150 or 200 years.  The tumbled down walls of that chapel are all that may be seen now, to the side of the road between Talbotstown and Killalesh.  That chapel is shown on the original Ordnance Survey map c1840, while the site of what is now Talbotstown Church was part of a field next to the then new National School.

Drury stated that:
… now some sixty years ago, service was first held in Talbotstown Chapel.  Father Gahan, who was parish priest at the time it was built, assembled his congregation on the site of the proposed new chapel, and ascertained by actual measurement the size necessary.  The dimensions of Tinnock Chapel were arrived at in the same way.

The new Talbotstown Church is said to have been built in 1842.  A Valuation Office House Book, dated in the mid-1840s, states:
This chapel has been lately built and the interior is in quite an unfinished state   the south western [end?] is [?ed] with cut stone in the grecian style and so are the windows on such side, and all appears to be of the best materials

The building features in The Churches of Kildare & Leighlin 2000 A.D., edited by Rev. John McEvoy, now Parish Priest of Rathvilly.  It mentions that the bell from the old chapel in Englishtown was installed in it.  Talbotstown is described as:
… a substantial structure built of granite, with a front of fine-cut blocks featuring six pillars.  Three doorways allow access, two to the nave and the central one to the organ gallery.  The porch has rounded stone arches, a feature repeated in the side-windows and the pillar-supported arch over the old altar.

The book notes that it never had stained-glass windows.  Regarding the interior, it mentions that ‘the striking features are the high walls of exposed stone which support a beautiful ceiling painted by Grispini, an Italian artist who also worked on Humewood Castle, Kiltegan.’  This painting would have been done a few decades after the erection of the church, as Humewood was built in the 1860s-1870s.