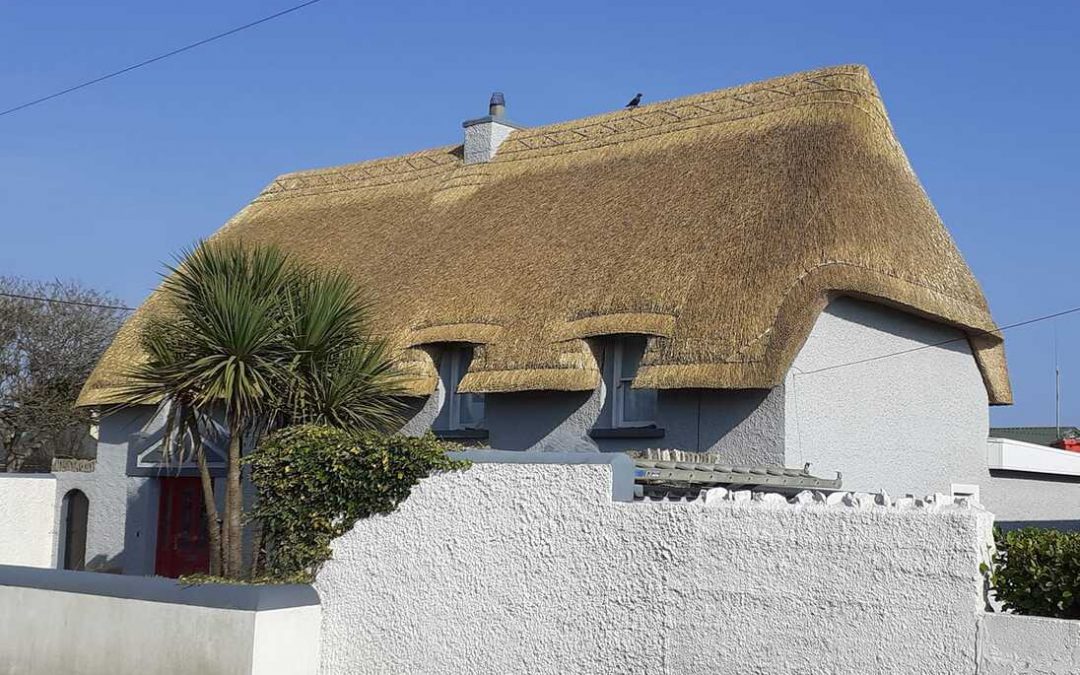 ​It’s not that far from home, but I had my first visit to Kilmore Quay, on the south coast of Wexford, just the other day. Apart from the combined feel of fishing village and seaside resort, the most striking thing about Kilmore Quay was the number of thatched houses to be seem.  Passing through the village of Kilmore, a few miles inland from Kilmore Quay, such roofs were evident too.

A century or more ago thatched roofs were to be seen all over Ireland.  By the 1960s they were a rarity.  They had been replaced in very many cases by corrugated iron coverings, as I was reminded by a comment in response to an image I posted a few weeks ago on my Facebook page.  Nowadays, driving through most parts of the country, passing a thatched cottage elicits comments about the quaintness and loveliness of its appearance.

The particular roof in the photograph here was just newly repaired and I had a chance to chat to the thatcher as he put huge bags of straw back in his trailer.  He told me that Wexford is now the county with the most thatched structures in Ireland.  He is a native of the village and one of only a handful of thatchers working in the county.  A straw thatch, like this bright new one, would be expected to last for about twenty to twenty-five years, while a reed thatch should last for about forty years.  Kilmore Quay has examples of both.

Looking online I learned more.  It would appear that the phenomenon is one of revival rather than survival.  The Irish School of Thatching, in Duncormick (not far from Kilmore Quay), runs short and intensive courses on the craft.  Its website shows that some quarter century ago the late Peter Brockett was brought over from Bedfordshire to give a two-year course in thatching for FÁS (An Foras Áiseanna Saothair, the former national training and employment authority).  Prior to that Ireland was accustomed to roofs lasting only seven years.

Revival rather than survival is a reason for optimism – even a source of inspiration.  Reintroducing thatch to parts of Ireland, just like native species of wildlife, is a possibility.  Wouldn’t it be nice?