McAllister – a monument with history 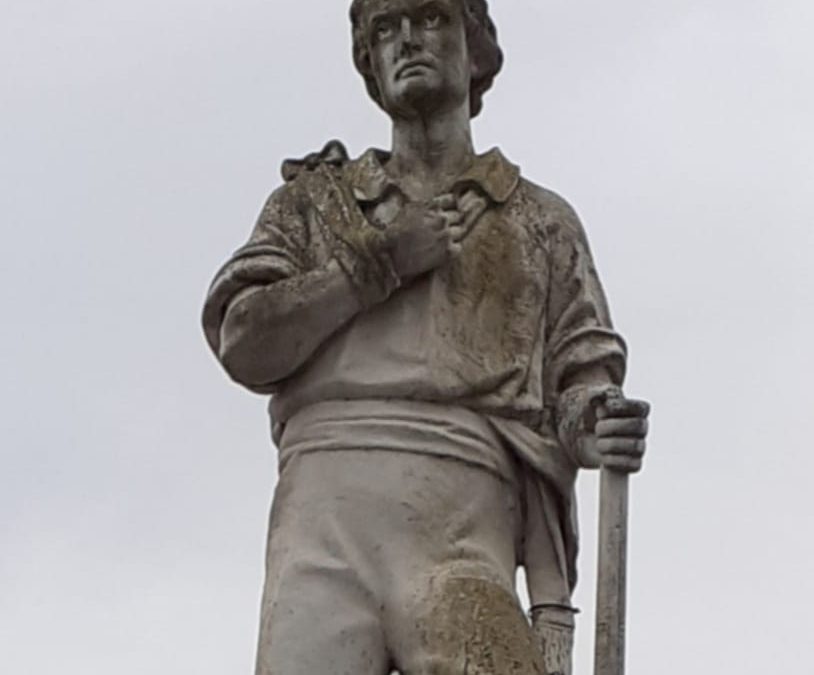 At the age of 116, Sam McAllister is the oldest resident of Baltinglass.  He has stood at the centre of Main Street since his unveiling on 8 May 1904.  He has become a symbol of Baltinglass and even a minor place-name.  People often meet ‘at McAllister’.  Pop-up events sometimes take place ‘at McAllister’.  Unfortunately, on occasion Sam is made hold flags for sporting events or nationalist commemorations – not the most respectful treatment for such a venerable resident.

Sam is very much an accepted part of our community.  I doubt that anyone dislikes him.  People may be indifferent to him and take him for granted, if they don’t actively like him.  Visitors take photographs of him.  He was only in his mid-fifties when I was born about a hundred yards away from where he stands, and he’s been at the focal point of my home town all my life.  The centre of Main Street would look very bare without him.

McAllister was a late starter in the centenary commemorations of the 1798 Rebellion.  Other towns in Wicklow, Carlow and Wexford got their rebel statues before Baltinglass got Sam.  The main impetus and funding came from Dublin-based organisers and nationalist emigrants living in the USA, but local committees were expected to raise money too.  Baltinglass was a bit tardy, so the foundation stone was laid four years after the centenary and it was another two years before the unveiling.

Visitors may look at the statue and see its message of rebellion.  Baltinglass natives may see an old friend.  But McAllister is also a minor work of art.  The sculptor was George Smyth of Dublin (c1857-1927).  He created a life-sized statue of Sicilian marble, representing a defiant McAllister with his right arm in a sling and a rifle by his left side.  The base was made of Ballyknockan granite.

Apparently George Smyth was known more for church sculpture.  His premises were in Great Brunswick Street, across the road and a few doors down from those of another firm of monumental sculptors, the Pearse family.  The street was later renamed after Patrick Pearse, while George Smyth’s premises were absorbed into Trinity College.  George’s father, grandfather and great-grandfather before him were sculptors.  The great-grandfather was Edward Smyth, who worked on the ornamentation of the Custom House in Dublin for the architect, James Gandon, who was greatly impressed by him.  The riverine heads that adorn the keystones of the Custom House were Edward Smyth’s creation.

As a minor work of art, our McAllister statue has an interesting pedigree, but what of its purpose?  Commemoration of 1798 was a way of keeping nationalism to the fore as the centenary of Ireland’s integration into the United Kingdom approached.  There is no doubt that the proliferation of statues built a hundred years after the United Irishmen’s ’98 Rebellion had a political motive, one not shared by all Irish people.  While the leaders of United Irishmen had set aside religious differences and the rebellion had been led in Ulster by Presbyterians, the fighting in the south-east had a strong sectarian element.  Joseph Holt, a Protestant from the Redcross area of Co. Wicklow, was almost the only exception to the rule.  Those who involved themselves in the rebellion in the south-east were almost exclusively Roman Catholic; those who were involved in opposing it were primarily Protestant.  And then there was Sam McAllister.

Sam is someone of whom little is known.  Certainly he was a Presbyterian from Ulster.  He may well have come to the West Wicklow area as a textile worker in the calico factory in the new town of Stratford-on-Slaney.  While in Co. Wicklow, he enlisted in the Antrim Militia, for whatever reason, in April 1798 but deserted three months later and joined the rebels.  In February 1799 he was one of a party of rebels on the run with the local leader, Michael Dwyer, when they sheltered one night in a number of houses in Derrynamuck in the Glen of Imaal.  They were ambushed and surrounded by a detachment of the Glengarry Fencibles.  McAllister and Dwyer were in one house with two other rebels, both of whom were killed.  McAllister was wounded in the arm and the thatched roof was set alight.  According to Dwyer, McAllister sacrificed his life by standing in the doorway and drawing the soldiers’ fire in order that Dwyer might escape, which he did.

When it came to erecting a centenary statue in Baltinglass, the original intention was that Dwyer would be represented by it.  However, there was a lingering resentment against him in the town due to a sectarian killing spree in December 1798 by a group of which he was the leader.  It took place as they left Baltinglass on a Fair Day and walked along the Dublin Road (now Sruhaun Road) towards Tuckmill.  Apparently Dwyer was not forgiven for this and so, remembering the Derrynamuck ambush, the shadowy figure of the little-known Presbyterian from Ulster was chosen in preference to the folk hero.

The monument’s inscription refers to both Dwyer and McAllister, and mentions the various nationalist struggles down to the Fenians in the 1860s.  This structure cannot have been a welcome new feature in the centre of the town for the several Protestant families who lived here, because it represented a tradition that largely alienated them.  Whatever they felt about it at the time, as the years went by McAllister became familiar.  He wasn’t preaching or fighting or causing any disturbance.  As the decades passed, he grew older and mellowed, and now he is older than anyone in Baltinglass.  His persona has developed and grown.

With all his ambiguities, he represents what the beholder wishes to see.  He’s a rebel, a shadowy hero, a Presbyterian nationalist, a work of art, an Ulsterman, an outsider, a ‘blow-in’ or (less politely) a ‘runner-in’, a migrant worker, an old friend, a venerable resident, an institution, an icon of Baltinglass, a symbol of our community, a constant in time of change.

I’m very fond of Sam.  I look at him and see all those things at different times.  Mainly I think of him as an old friend.  He’s like a man of contradictions, all whose opinions I don’t have to share in order to appreciate his friendship.