READ A BOOK, FOR GOD’S SAKE! 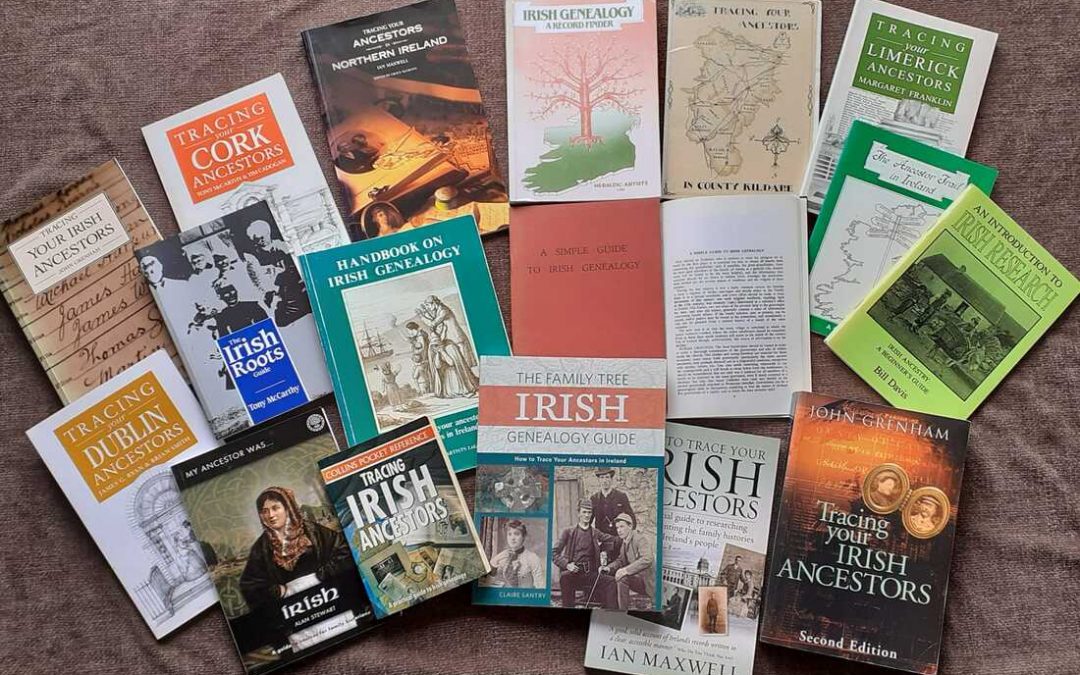 Not too long ago most people beginning to trace their ancestors found their way to a society they could join, a guide book they could read and / or a conference they could attend.  Many people still do, but as genealogy grows in popularity it is becoming more of an unstructured quick-fix online hobby than a serious pursuit.  Since big business has got involved it’s all ‘grow your tree’, unexplained databases, ‘hints’ generated by algorithms and, most recently, the magic of DNA testing.  The element lacking for most people new to genealogy is context.

You don’t get context from a database entry.  You don’t learn that Cork is the largest county in Ireland and that Collins is not an uncommon surname there.  You don’t gain the basic knowledge to tell the difference between your ancestor Timothy Murphy or Honoria Lynch and all the other people of those names.  Most importantly, you don’t realise that there are good reasons why your ancestor may not appear in that online database you’re using.  So, where do you find context?

The best introduction to genealogy is a guide book – a good one, written by someone who knows the subject.  But I’ve been wondering lately: do people new in family history read guide books anymore?  Of course, guide books still sell, but it seems that, while the genealogy ‘industry’ has grown rapidly in the past two decades, the market for such books hasn’t kept pace.  What’s that based on?  Well, only observation – it’s an opinion rather than an evidence-based fact.

I’ve mentioned some of the older guide books recently on my Instagram account and I intend to highlight more in the next while.  People may think that because a book was published ten, twenty or fifty years ago it has no value today.  That isn’t true.  The records described and explained in a guide book written in the 1960s have not changed: only the way of accessing those records is different now.

In 1992-1993 I wrote a series of articles in Irish Roots magazine reviewing all guide books for Irish ancestral research published to that point.  I’m afraid I was savage in my criticism of a few of the awful ones, so much so that the magazine’s then editor, Tony McCarthy, had to tone down my most outrageous attack.

One dreadful book drove me to say this:
​
A hypochondriac who has spent a lifetime studying a wide range of illnesses could hardly be audacious enough to write a basic medical text book, but anyone who has toyed with family history for a wet afternoon seems to feel eminently qualified to explain the process to all comers.  It’s as if they have invented a new pastime.

If I was writing such a series of reviews now I think I would be a kinder, especially to the self-deluded.

The very first guide book on Irish genealogy was written by the founder of the Irish Genealogical Research Society [IGRS], Rev. Wallace Clare, in 1937.  A Simple Guide to Irish Genealogy was quite a slim volume: more of a pamphlet really.  In 1966 a revised edition, updated by Rosemary ffolliott, was published by the IGRS.

Back in 1962 Margaret Dickson Falley’s two-volume Irish and Scotch-Irish Ancestral Research appeared.  While Father Clare’s work was pamphlet-like, Mrs. Falley’s guide was of biblical proportions.  In my review, I described it as ‘the eighth wonder of the world’.  However, I also warned:

This is a book to be dipped into, and you had better tie a rope around yourself and secure the other end to a strong family tree before taking a dip. Otherwise, you might never get back out.

The next guide produced was the Handbook on Irish Genealogy, published by Heraldic Artists in Dublin in 1970.  I have no idea what that original one contained.  My first copy was the enlarged edition that appeared in 1976.  The author was Donal F. Begley but, as he was then second in command at the Genealogical Office in Dublin Castle, he was not in a position to put his name to it.  It was not until 1984, when a sixth impression appeared, ‘Revised and Edited by Donal F. Begley’, that he was credited.

Three years before that, my favourite guide book of all time appeared, also published by Heraldic Artists.  It’s my sentimental favourite because it was written by some special people and it was my first place of reference during most of the first two decades of my career in genealogy.  This was edited by Donal Begley, who also wrote some chapters.  The other writers were Rosemary ffolliott, William Nolan, Eileen O’Byrne and Beryl Phair.  It has to be said that Rosemary ffolliott’s contribution to the book was the most significant, and the lists she compiled influenced some later guide book authors.  Her chapter on the Registry of Deeds is one I regularly advise people to read before venturing to that repository. 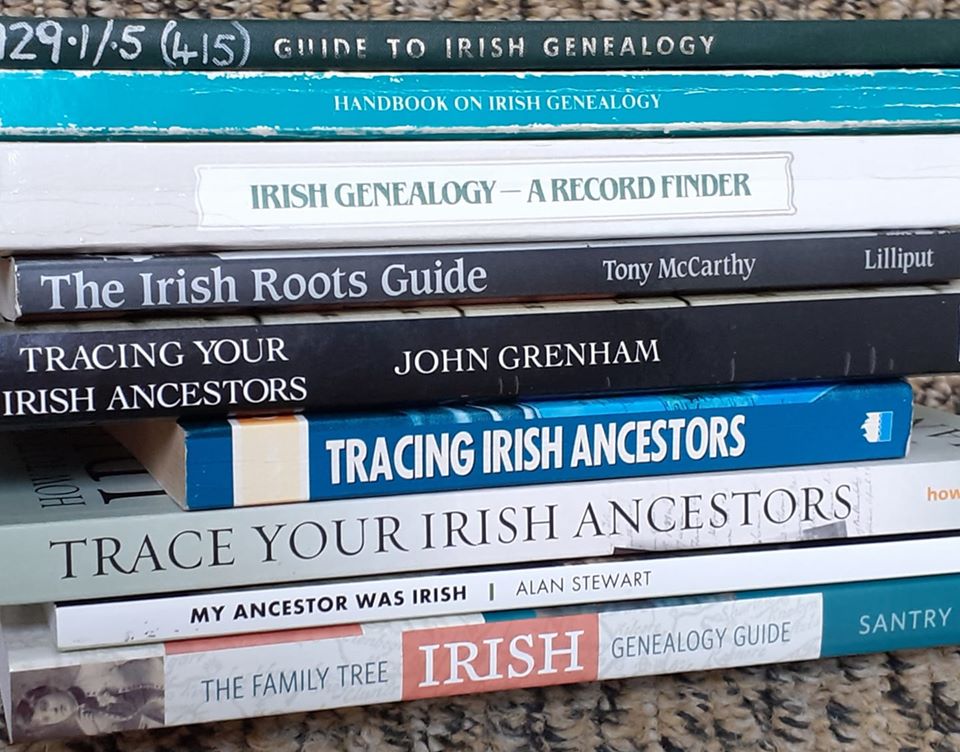 ​From 1988 forward Irish guide books started to appear with alarming frequency.  The reputable ones were James G. Ryan’s Irish Records: Sources for Family & Local History (1988), Tony McCarthy’s The Irish Roots Guide (1991), Christine Kinealy’s Tracing Your Irish Roots (1991), Bill Davis’s An Introduction to Irish Research: Irish Ancestry: a beginner’s guide (1992) and John Grenham’s Tracing Your Irish Ancestors (1992).  My reviews went up to that point.  I was unfairly nitpicking in the case of Tony McCarthy’s book. He was my editor, so I didn’t want to seem to show favour.  I regret that to this day.  It was a much better book than my self-important review allowed.

As I said, guide books came hot and heavy from 1988 forward, but one was more successful than all the others and it set its author’s career on a successful path.  That was John Grenham’s 1992 publication.  Its second (and much expanded) edition appeared in 1999, and the fifth came on the market last year.  John’s is the one book on Irish genealogy that is known just about everywhere, and justifiably so.

By 1993 I felt that there were more than enough books on Irish genealogy, but a few years after that review series I was induced to get involved in writing one myself.  My AGI colleague Máire Mac Conghail invited me to jointly write a book with her for HarperCollins.  Our Tracing Irish Ancestors appeared in 1997.  It was my first experience of book writing and it was a hard slog.  Some years later we got the opportunity to do an updated version.  We were tempted, but by then indexation and digitisation were getting into full swing and it was as if anything you wrote would be out of date by the next week.

The flood of publications slowed down after the 1990s and became a trickle.  One more significant book appeared in 1998.  This was Ireland: A Genealogical Guide by Kyle J. Betit and Dwight A. Radford, who were editing an excellent magazine, The Irish at Home and Abroad, in Salt Lake City at the time.  Since then there have been occasional books on the subject but the only one of note is Claire Santry’s The Family Tree Irish Genealogy Guide (2017).  As the writer of the most influential blog on Irish ancestral research, Claire has the information on all the latest developments in publication, indexation and digitisation at her fingertips, as well as the knowledge of the records themselves.

As I said, older guide books still have value in describing and explaining records.  Used copies of most of them are likely to be for sale somewhere on the planet, and Bookfinder is the best place to look for details online.  John Grenham’s (5th edition) and Claire Santry’s definitely may be purchased as new.  If you’re a beginner in Irish family history you would be advised to think beyond names in a database and learn about context.  As the headline says – read a book, for God’s sake!