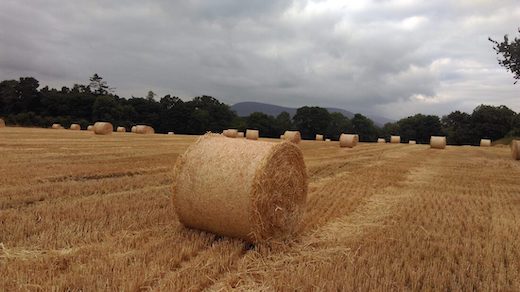 ​These photographs were taken at various times from more or less the same location between July 2018 and March 2020.  The field in the foreground is at the very edge of Co. Carlow.  It is in Mountkelly townland.  Beyond the trees is Killalish (pronounced ‘Killalesh’) Lower townland in Co. Wicklow.

The twin mountains in the background are Keadeen (on the left) and Carrig (on the right). Over the shoulder of Carrig on a clear day you can glimpse the summit of Lugnaquilla, the highest mountain in Wicklow, and in Leinster.  On the side of Keadeen towards where it merges with Carrig, are two discoloured patches that resemble two reclining figures. Local folklore says that they are the shapes of Finn McCool, of ancient legend, and his wife.  I wrote about these figures in a previous post.

The image above is from July 2018. Here are the rest of images: 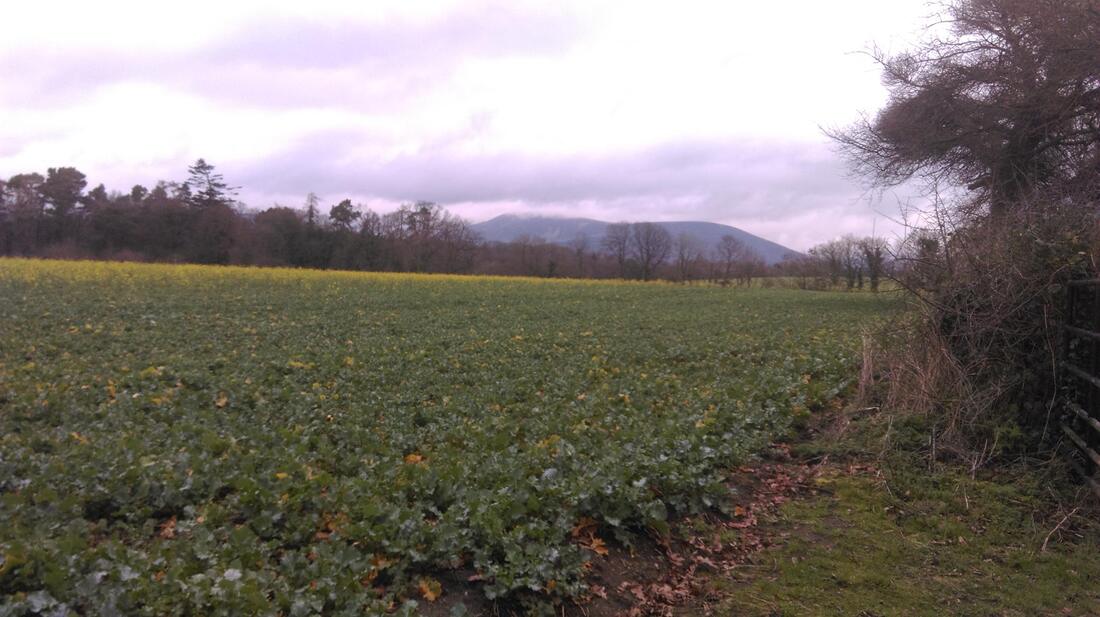 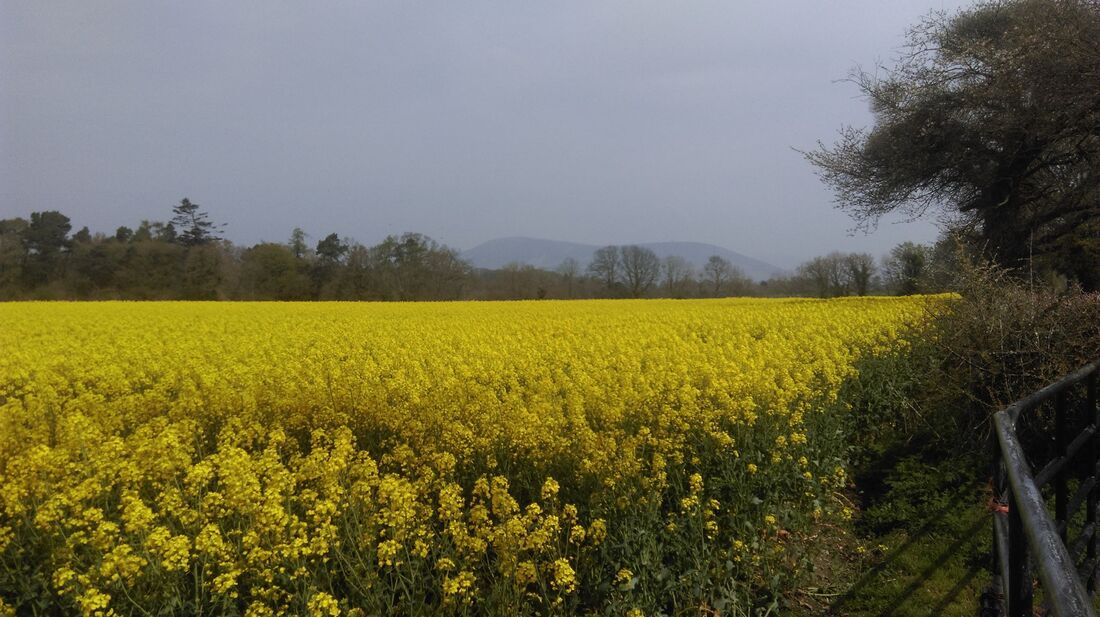 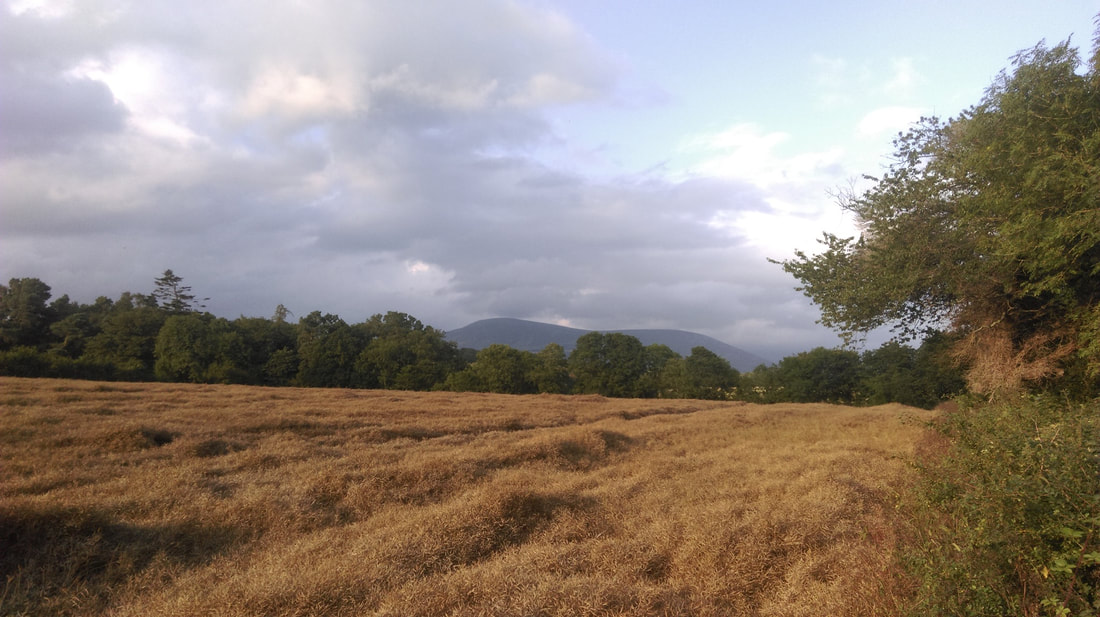 ​(5) Late August 2019
The other evening in Mountkelly Lane. It was beautiful weather and Lugnaquilla managed to peep over the shoulder of Carrig. I’ve taken the same view at different times over the past year. The yellow rapeseed dominated at the beginning of the summer. A few weeks ago it was all brown and tumbled down. Now just the stubble is left. I wonder what crop the field will get next year. 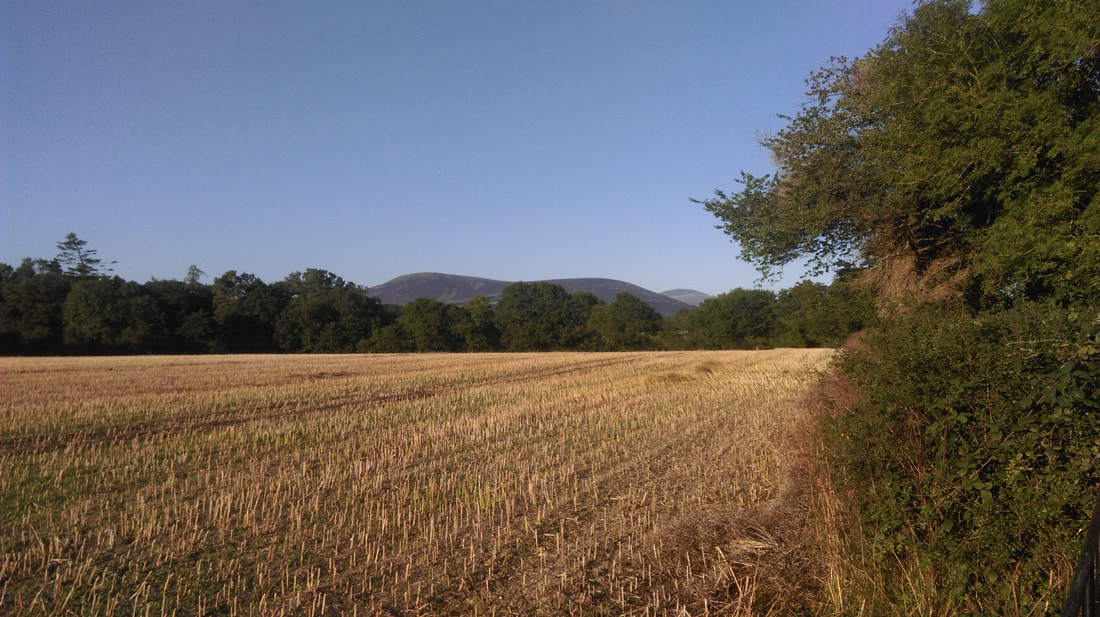 ​(6) October 2019
Yesterday (12 Oct) Mr & Mrs Finn McCool were enjoying a bit of autumnal sunshine on the side of Keadeen mountain. You can just see the figures over the top of the lowest trees. Of course, they were much clearer and closer to the naked eye. Lug is just in the picture also, on the right.

​(7) March 2020
Today (21 Mar) Finn & Mrs McCool were a little cold on the side of Keadeen. Not a day for sunbathing! I’m afraid you can’t really expect them to understand the importance of social distancing – they never move from that spot. Those clouds looked weirder in reality, as if a UFO was about to appear out of them. Anything could happen now that we’re living in a futuristic disaster movie that’s changing everything around us.