I SAW YOU ON THE TELLIE! 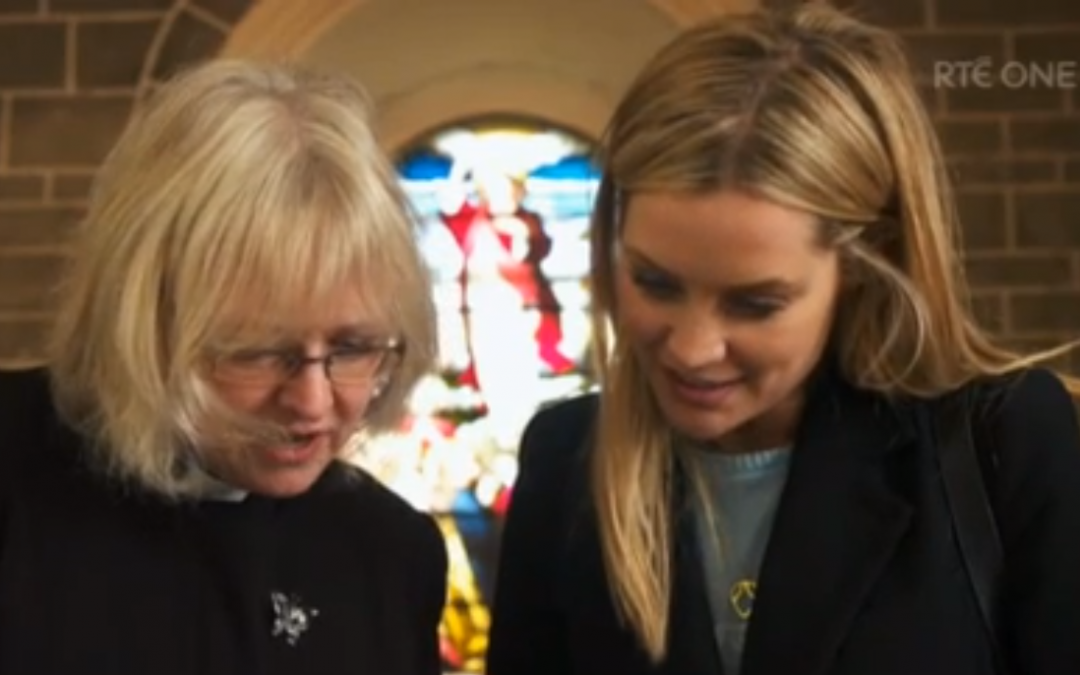 Supposedly evenings are when television programmes have their greatest impact.  Really, with so many channels now, it’s just by chance that people see any programme, unless it’s the news or Nationwide or something spectacular like Line of Duty or something addictive (to some) like Love Island.

In my childhood, rural Ireland had one television channel, so everyone saw just about every programme.  I remember (or think I do) watching the funeral of Pope John XXIII.  Certainly I remember seeing Charles Mitchell on the RTE news speaking about the assassination of JFK.

Even in the 60s, Dublin had the bonus of BBC and ITV.  Years later Ireland got a second domestic channel and before you knew it we had wall-to-wall channels, showing all sorts.  So now it’s quite rare for anyone to spot the odd appearance on tellie by someone they know.

In the autumn schedule in 2018, RTE broadcast the third series of the Irish version of Who Do You Think You Are?, a franchise that has had surprising longevity.  It’s almost 16 years old now.  That third Irish series was made by Animo TV.  I featured for less than ten minutes in one episode of it.  I was talking to Laura Whitmore about her Farrar ancestors from south Wicklow / north Wexford.  Blink and you’d miss me!

A few people told me they saw it / me – maybe four or five people altogether over the space of a few months.  Since then, the series has been repeated at least four times at an unearthly hour when only night owls like me would see it.  Indeed, I caught “my” episode once by accident.

Last weekend I was busy at Back To Our Past Belfast.  On the Saturday afternoon RTE had yet another repeat of “my” episode.  Apparently stormy Saturday afternoons are prime viewing time.  Despite the competition from all the channels, RTE must have done well that day.  Just as my AGI colleagues and I packed up to leave Belfast I got texts from three people telling me that they had seen me on tellie.  One of the texts was from Malta!  Over the next three days I heard from another six or seven people who hadn’t blinked during the episode and had witnessed my appearance.

In the past few decades I’ve been on the odd programme here or there on the goggle box.  This was my only time to be involved in any way with any of the WDYTYA? series.  Most of the research for this Irish one was done by my colleague, Nicola Morris, MAGI, and her company, Timeline.  I was drafted in for part of the research on Laura Whitmore’s ancestry and that’s why I ended up explaining some of it on camera.  In fact, all the professional genealogists who appeared as talking heads in that series were Members of Accredited Genealogists Ireland.  I’m pretty sure this was the only series in the entire franchise so far ever to feature only genealogists before the camera who hold credentials.  That’s a good development in a profession that generally disregards the importance of credentials.

Laura was very nice, as well as being very clued-in and professional.  While waiting about, I had plenty of time to wander around the empty rooms of Coolattin Park, the former Irish residence of the Earls Fitzwilliam, where “my” segment was filmed.  My one regret about the episode was that my research credit went to another AGI colleague: another Paul.  In a previous episode Paul MacCotter, MAGI, featured in the end credits for his research.  Evidently someone copied and pasted those credits into “my” episode and my work became that of the other Paul instead!  That’s television for you.  🙁