Alice Shaw was Here Some Time Ago 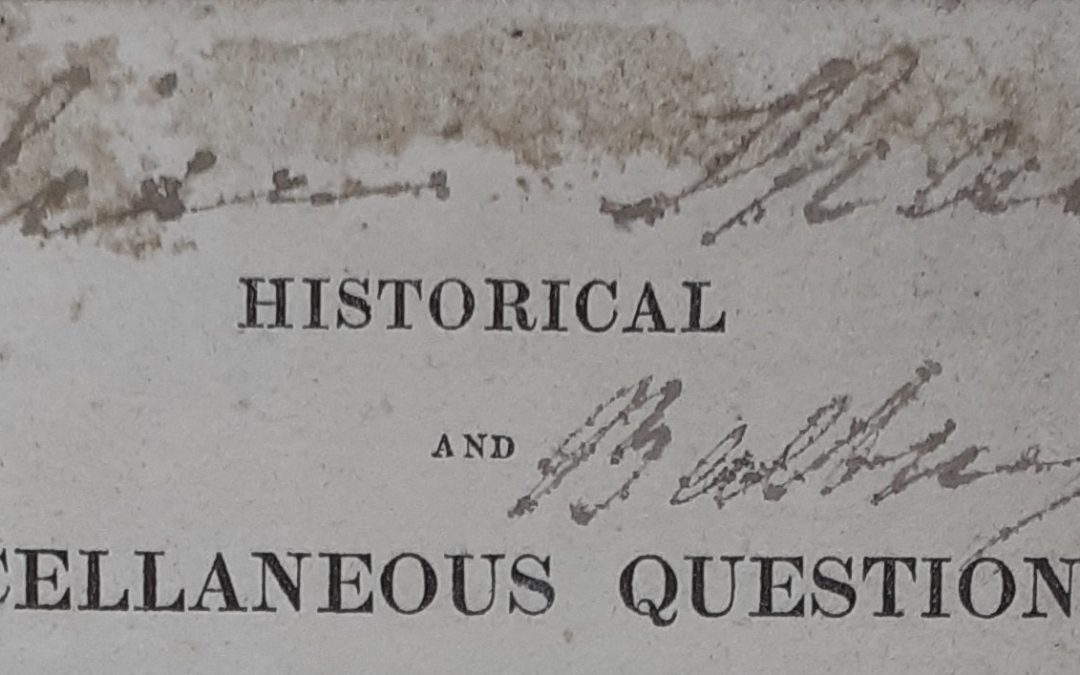 ​I sometimes think that I’m more familiar with people who lived in Baltinglass in the past than those who live here now.  I mean people who were here in the nineteenth century in particular.  It’s not that I communicate with their spirits or anything like that!  I just know them from their names in deeds or parish registers, in old newspapers or on gravestones.  One such person was Alice Shaw.

Recently someone who knows my interest in the past brought me two large suitcases of old books he had found in an outhouse he was clearing.  Though most of them were mouldy, he thought better of just dumping them before giving me the option of saving some of them.  They were on various subjects and in varying states of preservation.  I kept about twenty of them, some for their content, but others for their individual associations.

One book I rescued was Richmal Mangnall’s Historical and Miscellaneous Questions for the Use of Young People.  I admit that I had never heard of this book or its author.  I rely on the generosity and possible accuracy of Wikipedia for what I know now.  Richmal Mangnall was, in fact, a woman.  She was an English schoolmistress who first published the book anonymously in 1798, then in her late twenties.  Later it was taken up by Longmans, the London publishers, and there were 84 editions published up to 1857.

The book I have is a ‘New Edition, corrected and improved’, printed in 1829.  Curiosity as it is in its own right, it might not have caught my attention but for the signature on the title page: ‘Alice Shaw Baltinglass’.  Of course, I knew Alice well, though she had not lived here for over a century and a quarter.

A book gains a life beyond itself when its owner signs it.  In the first half of the nineteenth century Alice Shaw sat down in Baltinglass and wrote her name into this book; in the second decade of the twenty-first century I was standing in Baltinglass holding that book, looking at her signature.  The book bridged the time difference.  Alice Shaw was not just a random name that meant nothing to me.  Immediately I knew who she was and I wanted to keep the book for that reason.

Alice Shaw did not lead a remarkable life, as far as I know, and I have no idea about her personality.  She may have been lively, humorous, outgoing and charitable, or dour, crotchety, reserved and miserly.  Whatever her character, for about eighty years she was part of the life of my home town: one of my predecessors in the space I inhabit.

Going from memory and material easily to hand, I can outline a bit about Alice’s background.  The Shaws might be regarded as one of the old Baltinglass families.  They were here from at least the mid-eighteenth century and the last of the family to live in the town died in 1911.  A branch farmed just outside the town in Boley and they survived a few years more.  Alice’s parents were Robert and Hannah Shaw.  Robert was a builder, or building contractor.  Hannah’s maiden surname most likely was Jackson, as there is a Robert Shaw to Hannah Jackson entry dated 1812 in the Index to Marriage Licence Bonds for Ossory, Ferns and Leighlin dioceses.

The Shaws were Church of Ireland.  Baltinglass C. of I. parish is one of those whose registers were destroyed in the Public Record Office in 1922, so there is no surviving baptismal record for Alice.  If her parents married in 1812 she must have been younger than the stated age on her death record, so probably she was born in late 1812 or in 1813.  It is known that Robert and Hannah had at least two children, Alice and Esther.  It is very likely that they had several more children, since Esther was about twelve years younger than her sister.

As Alice Shaw’s copy of Mangnall’s Historical and Miscellaneous Questions was published in 1829, she may have received it about that time, when she would have been in her late teens.  Certainly her signature seems mature, but it is unlikely that she would have acquired a book like this beyond her mid-twenties.  I wonder was it was a gift from her parents or a teacher or a friend?  Maybe she bought it herself.  I have a feeling that it meant something to her.

It is uncertain where precisely the family lived during Alice’s youth.  In the 1840s Robert Shaw occupied two properties in the town and at least from that time the family lived in the one at the end of Main Street, directly opposite what is now the Credit Union.  Robert’s other property was what is now Patterson’s in Main Street.  Apparently he was renting other houses in the town to tenants, as Alice later did likewise.

Alice was in her early thirties when her father died in February 1846.  Five and a half years later her mother died, in September 1851.  For the rest of her life Alice was the owner of all the family’s property.  As well as two pieces of land, in Sruhaun and Baltinglass East, amounting to 19 acres, she had tenants in two houses in Weavers’ Square and two houses in Mill Street.  She and her sister Esther never married and apparently they continued to live together in the family home for over thirty years.  By the 1880s they would have been regarded as elderly ladies.

In June 1888 Esther died of hepatitis at the age of 60.  She was buried in Baltinglass Abbey with their parents.  Four years later Alice also left this world, dying on 2 November 1892 from what was described as an intestinal obstruction which she endured for almost two weeks.  She was probably about 79 years old, though her death record stated that she was 81.  Her cousin and neighbour, Lizzie Shaw, was the informant on the record.  The executor of Alice’s will was Rev. John Usher, the then Rector of Baltinglass parish.  She left an estate of £354-16-0.

Alice Shaw was part of the life of Baltinglass for several decades.  Her entire existence was spent in my corner of the world.  No doubt she was buried with her parents and sister in Baltinglass Abbey, but no one bothered to add her name to the inscription on the gravestone.  However, one day she sat down and wrote her name in her book; now that book is mine.