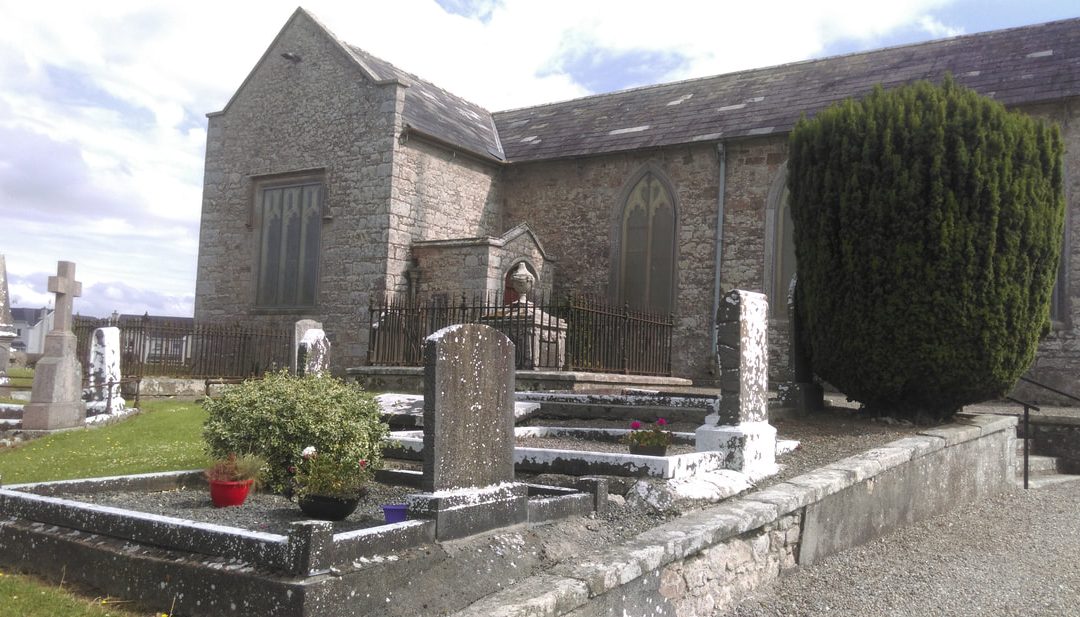 ​I’ve been haunting St. Mary’s churchyard in Rathvilly on and off for the past few weeks.  It’s surrounded almost entirely by houses, with the road to Tullow completing the circle, so it’s hard not to be seen.  I’m sure people were wondering about the strange man returning every few days on his bicycle to crouch among the gravestones and scribble on pieces of paper.  But on all my visits I only spoke to two people.  One was a genial peer who came in his capacity as a parishioner to repair a capstone on a low wall.  We discussed the strangeness of a ‘warped’ flat gravestone that has been sagging for nearly two centuries.  The other was the friendly and helpful caretaker who also found the memorials interesting.

As you may have guessed, my haunting of the churchyard was for the purpose of transcribing the gravestone inscriptions.  It was the conclusion of a small project I started exactly twenty years ago!  In the summer of 1999, when I lived in Dublin, I was house-sitting for friends in my native Baltinglass.  The weather was good and I felt like cycling.  I decided to start transcribing the stones in Rathvilly Church of Ireland graveyard.  I also toyed with following up with the Catholic graveyard in the heart of the village till I took a good look at its size and thought the better of it.

My work in 1999 progressed well.  I put my notes away, thinking they should be typed up and published at some time.  I mislaid them and periodically came across them, only to forget where they were, over and over.  At one stage I suggested to the editors of the West Wicklow Historical Society Journal that I would submit the memorial transcriptions as an article.  This year one of them reminded me of this.  As I thought they would be the shortest route to a completed article and as I had recently rediscovered them, I promised the article.  Incidentally, before you ask, Rathvilly is indeed in Co. Carlow, but it’s just over the border and the WWHS covers West Wicklow and environs.  Besides, several Baltinglass parishioners are buried in Rathvilly.

It was only when I started typing up my notes that I realised that I hadn’t covered all the graves I had intended to.  In any case, I knew there were many question marks that would have to be addressed.  So back I cycled to the churchyard in the summer of 2019 and plodded about trying to make sense of my twenty-year-old findings.  Many of the inscriptions were tricky and some downright impossible, so the project dragged on.  I was back and forth to Rathvilly on relatively sunny days, eating my snacks on the Green like a cycling tourist, and latterly in the comfort of the newly opened Wild Flower Café.  I have to admit that it was no real hardship.  Transcribing gravestone inscriptions is fun for me and if I had the time I’d do it more often.  But my clients’ reports are more pressing.

I remember once when I was in my early teens being in the cemetery in Baltinglass with my Dad.  He walked on a bit but I was among the very old graves, standing on a flat stone, crouched down, intent on deciphering the wording.  There was a yew tree to my left and I became aware of some activity near it.  I rotated my downturned face to the left and there were two women crouching low to get a good look under the tree at what I might be doing.  Once spotted, they straightened up quickly and went on their way.  They were women well known for patrolling the town in search of trivial intelligence.  I’m sure I gave an edge to their findings on that day.  They certainly made me laugh!

So, today I celebrate the submission of my article on the Rathvilly church and churchyard memorials to the editors of the WWHSJ.  The estimated publication date is in October.  I must say thank you to Ger Clarke, caretaker of St. Mary’s, and Hazel Burgess, churchwarden, for their assistance in completing the project.  And I hope that it gives more longevity to the memory of those buried at St. Mary’s.