Family Portraits and Echoes of the Past 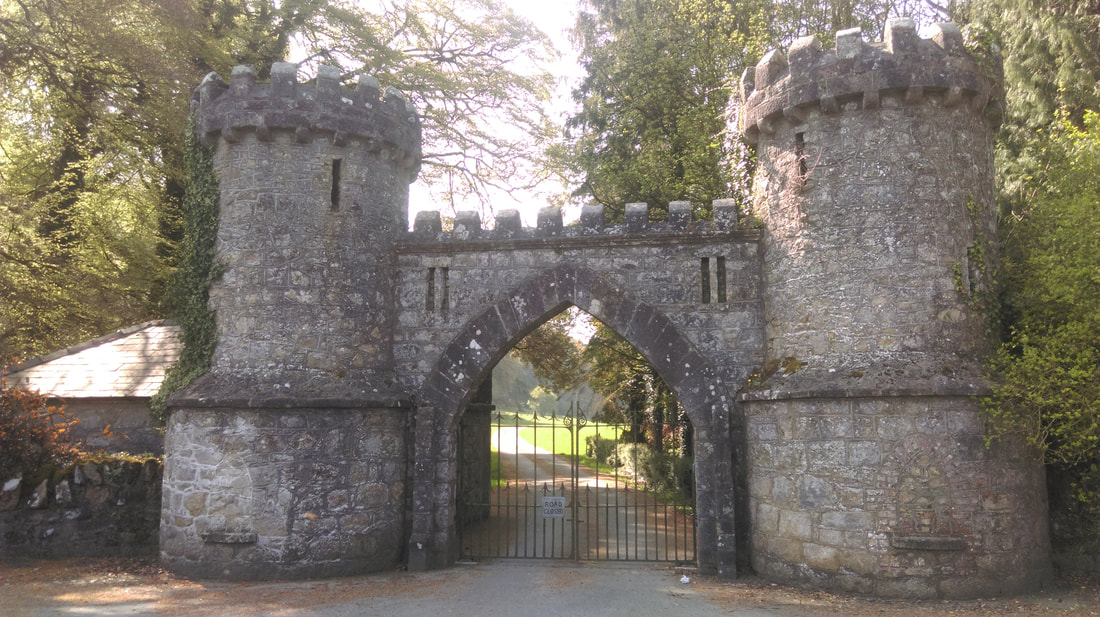 ​A week ago I attended a marathon of an event.  It lasted from 10.30am to sometime about 9pm, long after I had left.  It was absorbing.  It was full of surprises, good and bad.  It was a glimpse into the past, and it said a lot about the present Irish economy.  For anyone from my locality who attended it, there was no doubt a tinge of sadness as well as great fascination.

This event was the sale of the contents of Fortgranite, a gentleman’s residence just a few miles outside of Baltinglass.  For over two hundred years it had been the home of the Dennis family, but recently it was sold and now we were picking over the family’s heirlooms, their more personal possessions and the things they had forgotten in the less visited corners of the ancient house.

As well as wanting to purchase a pair of Victorian bookcases and some genealogical books, I had the mad notion of ‘saving’ one of the many portraits for Baltinglass.  The house was crammed full of the images of the Dennis family’s ancestors.  Most of them were from the Swift family.  Apparently they had come to Fortgranite from Swiftsheath, Co. Kilkenny.

In the male line the Dennises originally were Swifts.  Meade Swift, a first cousin of the famous Jonathan Swift and a second cousin of the poet John Dryden, was the father of Thomas Swift who married Frances Dennis.  Frances’s brother Lord Tracton died without issue in 1782.  He left his estates in Co. Kerry to his nephew Rev. Meade Swift on condition that he adopt the surname of Dennis.  In 1780 Rev. Meade Swift had married Delia Sophia Saunders of Saunders Grove.  Through this marriage the family’s connection with the Baltinglass area had come about.  It was their son Thomas Stratford Dennis who was the first owner of Fortgranite.  It would appear that the property came with his marriage in 1810 to his first cousin Katherine Martha Maria Saunders.  The last resident owner of Fortgranite was their great-great-grandson Piers Dennis, who died in January 2016.

The Swift portraits were not the ones I was concerned about.  I got it into my head that the Stratford family portraits should remain in Baltinglass, where they had history and context.  In my mind’s eye I could see them on the walls of Baltinglass Courthouse, a building almost contemporary with Fortgranite.  Unable to interest anyone with money in being philanthropic, I innocently decided that I might manage to ‘save’ one of the portraits.  Who could possibly wish to go beyond the guide price to purchase portraits of complete strangers by unknown artists?  Well now I know that the answer to that is many people.  The Stratford portrait I was least interested in was that of Lady Maria Stratford, about whose very existence I was previously unaware.  The guide price was €4,000 to €6,000 but Lady Maria was fought over by a number of people before someone bidding over the phone got possession for €18,000.  It must be said that the catalogue indicated that this painting was attributed to James Latham.

So, why did the Stratfords interest me, and why where their portraits in Fortgranite?  Robert and Mary Stratford had a residence in Baltinglass in the 1660s.  Their son Edward, though he lived in Belan, Co. Kildare, purchased the town of Baltinglass and many of the townlands in its vicinity from the Carroll family in 1707.  His son John Stratford did much to encourage the development of Baltinglass.  He married Martha daughter of Rev. Benjamin Neale (apparently Rector variously of Hacketstown, Kiltegan and Baltinglass) and through the marriage acquired further local property, including Mountneill, Co. Carlow, a few miles south of Baltinglass.

John and Martha became Baron and Baroness Baltinglass in 1763, Viscount and Viscountess Aldborough in 1776 and finally Earl and Countess of Aldborough in 1777.  Their eldest son, Edward, was the more famous 2nd Earl.  It was he who build Aldborough House in Dublin and founded the industrial town (now village) of Stratford-on-Slaney, a few miles north of Baltinglass.

The Dennis family were descended from John and Martha through their daughter, Martha Saunders.  The last of the Stratfords was the 6th Earl.  When his residence, Stratford Lodge (where Baltinglass Golf Club is now located), went up in flames in 1858 four Dennis brothers were among those who attempted to save its contents.  Whether the portraits were there at the time is unclear but they came into the possession of the Dennis family either then or on the death of the last earl’s mother.  In any case they adorned the walls of Fortgranite for over 130 years.

As for the portraits, they included one of the original Edward Stratford, one of his son John (1st Earl), two of John’s wife Martha and one of their son Edward (2nd Earl).  To me, these historical characters were part of the story of Baltinglass and their images bring to life an aspect of our heritage.  I determined to at least bid for the ‘cheapest’ of them, the nicer of the two of Martha Neale.  The guide price was €1,500-€2,000 and I was sure it would sell for less.  I never got to take part.  The bidding started at €1,500 and the portrait sold for €5,000.

Martha Neale may not be a well-known historical character internationally but she possibly was the earliest woman associated with Baltinglass of whom there is a surviving image.  Genealogically she made her mark on the world.  As the mother of at least fifteen (family legend says nineteen) children she produced thousands of descendants.  Among those living today are the Princesses Beatrice and Eugenie of York, the explorer Sir Ranulph Fiennes and the acting brothers Ralph and Joseph Fiennes.

During the auction various military jackets went for huge prices.  Much attention was given to a letter dated 1901 from Winston Churchill replying to Capt. (later Col.) Meade J.C. Dennis, who took exception to his comment on the conduct of the Boer War.  With the interest shown in military memorabilia it might have been expected that the letter would fetch a hefty sum, but this was not the case.

One portrait that went past me unnoticed, because it was surrounded in the auction by several Swifts, was that of ‘Miss A. Plunkett, niece of the first Lord Aldborough, Countess of Antrim’.  This was Anne Plunkett, a granddaughter of the Edward Stratford who purchased Baltinglass in 1707.  She was also the great-great-great-great-grandmother of Winston Churchill.  I doubt Churchill was aware that the man he was replying to in 1901 was his fifth cousin twice removed.

It wasn’t necessary for me to find space in my house to accommodate Martha Neale, and she left Baltinglass after all.  However, I learned that she and the other Stratfords of whom I was concerned went to ‘good homes’ in Ireland.  This is reassuring to know.  The Dennises were the last descendants of the Stratfords living locally, some three and a half centuries after Robert and Mary Stratford first came to Baltinglass.  ‘The end of an era’ is a dreadfully hackneyed phrase.  But in this instance the auction was just that, and I was there to witness the end.