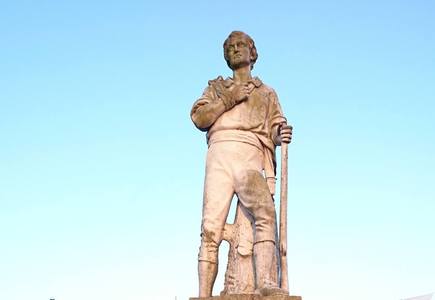 ​If you were to take a photograph to capture the essence of Baltinglass you might think of a general view of the town from the Carlow Road, or one of the Abbey from across the river.  But you’re as likely to think of the McAllister monument as your symbol of Baltinglass.  McAllister has been at the heart of the town for a lot longer than living memory.  In fact, Sam McAllister has been standing in Main Street for exactly one hundred years [first published in 2004].

In May 1904 a huge crowd gathered for the unveiling of the new statue to commemorate the 1798 Rebellion.  Six years had passed since the centenary, but the idea of a monument had only been mooted in Baltinglass at a meeting in March 1898.  Raising money for the statue was a long process.  Two organisations based in Dublin were the driving forces behind the commemorations throughout Wicklow.  On a local level the Dwyer and McAllister Memorial Committee did their best to raise funds.  However, much of the money came from outside Ireland, with emigrants in America subscribing substantially.

The first ceremony at the monument site was the laying of the foundation stone on Sunday 15 June 1902.  Special trains ran from Dublin with a return fare of two shillings.  Hundreds of people poured into the town.  Despite unrelenting rain, there was a long parade before the stone was laid by E.P. O’Kelly, the Baltinglass man who was then Chairman of Wicklow County Council.

It was almost another two years before the monument was put in place and unveiled.  On Sunday 8 May 1904 an estimated 10,000 people crowded into the town.  Fortunately it was a sunny day.  A parade started at the railway station, where the Lord Mayor of Dublin and other dignitaries arrived.  With flags, banners, costumes and marching bands, it was an exciting day for Baltinglass in an era when entertainment was not to be had at the press of a button.

So began Sam McAllister’s long vigil in Main Street.  The railings that once surrounded the base of the statue were removed decades ago to be placed at McAllister’s grave in Kilranelagh.  In more recent years the area around the statue was paved, and now Sam is floodlit at night [not anymore].  After a hundred years keeping watch over the town McAllister is recognisable to all Baltinglass people as a symbol of home.  But the irony is that the real Sam McAllister was an outsider with no real links to the town.

Little is known about McAllister’s life other than that he was a Presbyterian, originally from Ulster, who deserted from the Antrim Militia and joined the rebels.  The historian Ruán O’Donnell says that McAllister joined the Antrim Militia on 1 April 1798 in Co. Wicklow and that he may have been resident in the area at the time.  That being the case, there is a strong possibility that he was living in Stratford, where there was a significant number of Presbyterians among the weavers working in the textile factory.

What gave him his heroic reputation was the circumstance of his death in the early hours of 16 February 1799.  A group of rebels led by Michael Dwyer were sheltering for the night at Derrynamuck in the Glen of Imaal.  They were ambushed by a detachment of soldiers and McAllister was wounded in an exchange of fire.  In order that Dwyer might escape, McAllister stood in the doorway and drew the fire of the surrounding soldiers.

Unlike other rebellions in Irish history, 1798 involved people from various religious backgrounds.  In Ulster it was primarily a Presbyterian phenomenon; in Leinster it was primarily Catholic, but there were Church of Ireland activists, such as Joseph Holt from east Wicklow.  However, it has to be admitted that in Wicklow the revolt had a sectarian element and the rebels were no heroes to the general Protestant population.

Sam McAllister was, therefore, something of an oddity.  It would be nice to think that the choice of McAllister for the Baltinglass monument was primarily inspired by a desire to be inclusive of all elements in Irish society.  However, tradition has it that he was selected in place of Michael Dwyer because Dwyer was held responsible in Baltinglass for a sectarian killing spree in Sruhaun and Tuckmill on 8 December 1798.

Monuments have a way of developing their own character.  In 1904 McAllister represented heroism in rebellion.  After a century on the street in Baltinglass, Sam has become a symbol of the town.  The real Sam McAllister was an outsider.  His image in the heart of our town is a reminder that today’s outsider is tomorrow’s old resident.

[First published in The Baltinglass Review, 2004]