The Bridges and Fords of Baltinglass Parish 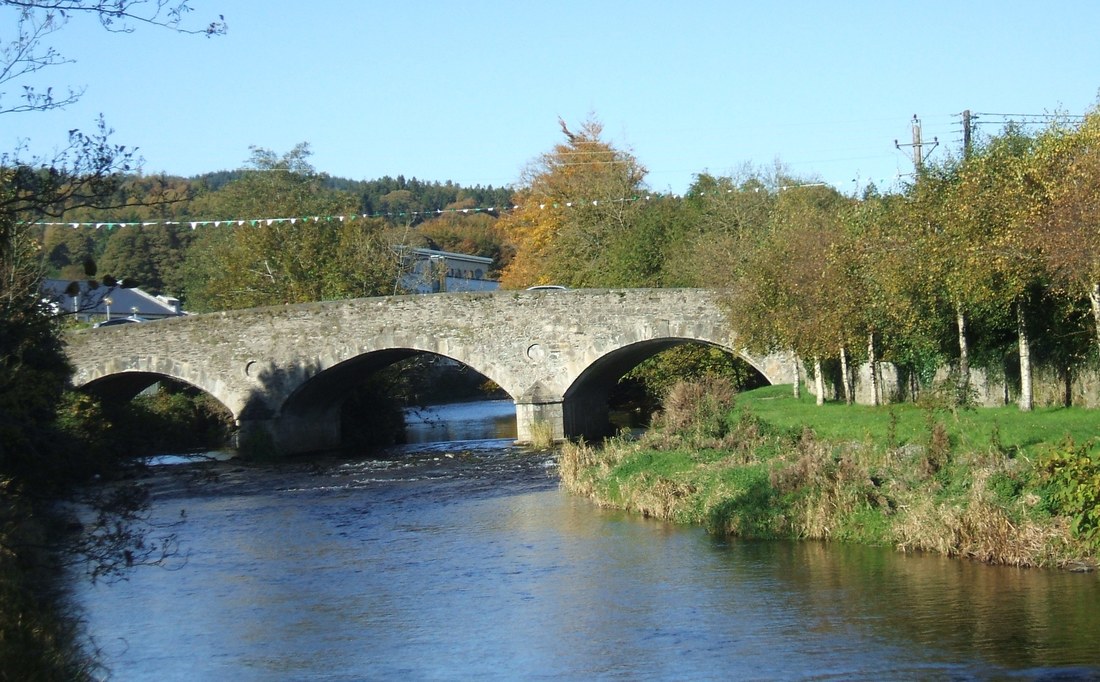 ​Old bridges have a strange way of blending into the landscape.  Often we don’t notice them at all.  Some of the smaller ones are camouflaged by greenery or hidden by road resurfacing.  Larger ones are so familiar that they seem to have been there forever.  With so much concern about flooding this year our bridges have come back into focus.  Eldon Bridge and Baltinglass Bridge have been in the public eye more in 2010 than at any time since 1965.  That was the year when another of our old bridges was swept away by the waters of the Slaney.

It may surprise people that there are well over twenty bridges in our parish, not counting those over the old railway line.  Most of them are nameless and secretly cross small streams.  ‘Our parish’ may seem a vague term.  In this instance we are talking about the Catholic parish.  It has set geographical boundaries, incorporating Ballynure, Baltinglass, Rathbran and Rathtoole civil parishes in Co. Wicklow and parts of Graney and Kineagh civil parishes in Co. Kildare.

In the Kildare end of our parish are two bridges of note.  Miller’s Bridge, on the road between The Pike and Bigstone, crosses a stream that flows off Carrigeen hill.  The stream joins forces with others before reaching the bridge at Graney.  This familiar humpback on the road from Baltinglass to Castledermot was the scene of the infamous Graney Ambush on 24 October 1922, a brutal episode in the Civil War.  This stream flows into the Lerr at Castledermot and enters the Barrow north of Carlow Town.

In the west of our parish, straddling the boundary between Wicklow and Kildare, is Ballycore Bridge, now most noticeable as a narrowing of the R747, which links Baltinglass to the new M9.  The stream it crosses flows on through Timolin to join the Greese and make its way into the Barrow just south of Maganey.  Close to Ballycore, but on a less trodden path is Rathtoole Bridge.  It links the R747 with the ‘Bed Road’.  Despite its name, this narrow single-arch bridge is slightly outside Rathtoole townland.  The north side of it is in Baronstown Lower and the south side is in Lackareagh and Moneymore.

Apart from the Slaney crossings there are two other named bridges in our parish.  Kyle (officially spelt ‘Kill’) is a two-arch bridge over a stream fed from Kilranelagh and Baltinglass hills.  Further on its course this stream once powered the mill in Tuckmill.  It still flows unnoticed under the N81 to join the Slaney just north of Tuckmill Cross.  Further south, a network of streams from the Talbotstown area drain into a small river that enters the Slaney at Kilmurry.  The small river separates Baltinglass from Rathvilly parish and Wicklow from Carlow.  Spanning it with a single arch is Mountneill Bridge, a venerable humpback with great character.

The bridging of the Slaney goes back to the 1600s.  Tradition has it that there was a ford in Baltinglass north of where the present bridge stands.  The Cistercian monks who built the original mill on the west bank of the river had to have some crossing point from the Abbey on the east side.  Sometime in the latter half of the seventeenth century Sir Maurice Eustace built a bridge in the town.  It may have been immediately adjacent to the ford.  A map from 1745 shows it about where Gillespie’s SuperValu now faces St. Kevin’s.  Before the present SuperValu was built in the late twentieth century the line of the street leading down the slope to this bridge was discernible.  The popular name for Jimmy Donohoe’s pub, ‘the Hollow’, most likely originated from this sloping street.

In the late eighteenth century the then owner of the town, Edward Stratford, 2nd Earl of Aldborough, built a new stone bridge south of the original one.  Its western approach was aligned with Cuckoo Lane (Belan Street), which led to his residence at Belan, Co. Kildare.  The bridge crossed the river at a slight angle so that its eastern approach was not exactly aligned with the existing north side of Main Street.  Presumably this was to centre it on the widened street.  Edward’s three-arch bridge had triangular cutwaters and dressed granite voussoirs and it was under construction in 1788.  At the time it must have been impressively wide.  Built for horse drawn vehicles almost a quarter of a millennium ago, this bridge still stands at the heart of the town, tested daily by twenty-first century articulated lorries.

Despite its antiquity, Baltinglass Bridge is not the oldest existing Slaney bridge in our parish.  That honour goes to Manger Bridge, which is estimated to date from some decades earlier and may be the oldest bridge on the river’s entire course.  In its heyday this narrow five-arch crossing was on the road from Baltinglass through Dunlavin to Dublin.  Lord Aldborough’s new town of Stratford-upon-Slaney was built on this road in the 1780s.  The realignment of the Dublin road to the east of the river in the early nineteenth century diminished Manger’s importance.  It may well have saved it too, as road expansion inevitably would have seen a wider bridge replace it.

Tuckmill Bridge is another eighteenth century construction.  The late Tommy Doyle of the Lough maintained a tradition that one of his ancestors was drowned at a fording place in Tuckmill in the 1770s.  Subsequently the present bridge was built.  Tommy stated that the Dempsey family came to work on it and then settled in Tuckmill.

An old fording place that has long been defunct is Maiden’s Ford, between Cloghcastle and the end of the Green Lane in Newtownsaunders.  According to the Ordnance Survey Name Books, compiled in the 1830s, it got its name from ‘a young woman having been drowned at it about a hundred years ago’.  Michael Coogan of the Redwells appears to have been the source of this information.  Further downstream, between Holdenstown Lower and Slaney Park, was Lady’s Ford.  It connected a now abandoned road through Holdenstown with the Redwells.  Apparently again quoting Coogan, the Name Books state that it was named after ‘a Lady being drowned at it in crossing the River about 50 years ago’.

In the 1940s the place-names expert Liam Price dismissed the explanations of Maiden’s Ford and Lady’s Ford as unconvincingly similar.  Perhaps Price was too quick to reject the traditions.  In the mid-eighteenth century Slaney Park was the home of Sir Warren Crosbie who called it Crosbie Park.  His wife was Dorothy Howard from Northumberland.  Their grandson, the balloonist Richard Crosbie, Ireland’s first aviator, is believed to have been born at Crosbie Park.  Lady Crosbie drowned in the Slaney on 29 October 1748.  Pue’s Occurrences of 1-5 November 1748 reported:
Last Week the Lady of Sir Warren Crosbie was unfortunately drowned, as she was crossing the River Slany near Enniscorthy in her Coach, occasioned by a great Flood that was in the River.  Sir Warren Crosbie and some other Gentlemen who were in the Coach, happily saved their Lives by swimming to Shore; two of the Coach Horses were also drowned.
The coincidence is too great to ignore.  It is easier to dismiss the newspaper’s mention of Enniscorthy as inaccurate than to dismiss the potential connection with Lady’s Ford.

The old road leading through Holdenstown ran parallel to the present one, which came into existence before 1838 and possibly much earlier.  At some stage, perhaps in the 1820s, Aldborough Bridge was built, linking this road to the Redwells.  The three-arch humpback still serves this quiet road.

The Building Bridge also was erected sometime before 1838, linking the village of Stratford to the new Baltinglass to Dublin road.  This may well have been to provide better access to the cotton printing factory that was then just a few hundred yards from the bridge.  On the night of 17 November 1965, during the greatest flood in living memory, the Building Bridge gave way, causing concern for the other old bridges downstream.  Indeed a small portion of Tuckmill Bridge also went in that flood but it was repaired.  Afterwards the Building Bridge was replaced by a temporary wooden structure before the present concrete bridge was put in place some twenty years ago.  It is a functional structure but not as pleasing to the eye as the older bridges.

Perhaps the most noticeable crossing of the Slaney within our parish is Eldon Bridge, tucked into a sharp bend on the N81.  Before its construction the way from Baltinglass to Dublin ran from Chapel Hill to Tuckmill along what we now call the Sruhaun Road.  On the other side of the river the way from Baltinglass to Grangecon and Dunlavin ran from Mill Street to Raheen.  In about 1829 a new stretch of road was run from the western side across the new Eldon Bridge to join the existing Dublin road at the foot of the hill.  John Scott, the first Earl of Eldon, was Lord Chancellor until 1827 and the bridge appears to have been named for him.  It spans three arches, but slightly at a remove on the eastern side is an additional dry arch for use in floods.  Until just a couple of years ago there was a marked dip on the western approach to Eldon Bridge.  This allowed river water to cross the road at times of high flooding.  Controversially the dip was smoothed over when the road to the dump in Rampere was widened.  Many people familiar with the Slaney’s habits fear that this change might weaken the bridge’s structure if another major flood were to happen.

We may pay little attention to our bridges as a rule, but they are part of the fabric of our parish and we would miss them if they were to vanish from the landscape.  Baltinglass Bridge is barely wide enough for the vehicular and pedestrian traffic it is taxed with now.  The provision of a free-standing walkway beside it could relieve the congestion and make it safer for those on foot.  Ultimately though, this old familiar bridge will only be preserved for posterity by a bridge that has yet to be built.  The Baltinglass Town Development Plan has identified the route for a relief road south of the town.  Unfortunately, it is left to private enterprise to develop such a road so we may be waiting quite some time for our first bridge of the new millennium.

[first published in The Review 2010 – A year in the life of Baltinglass, Bigstone, Grangecon and Stratford] 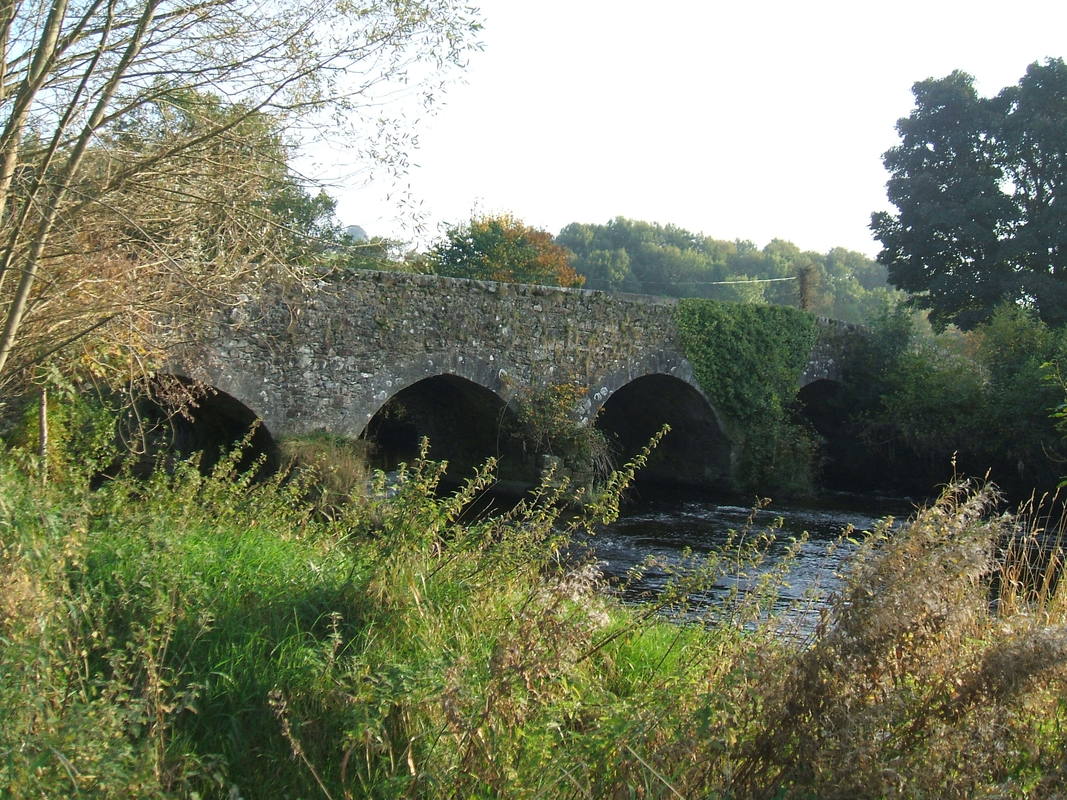