The Tower in the Graveyard 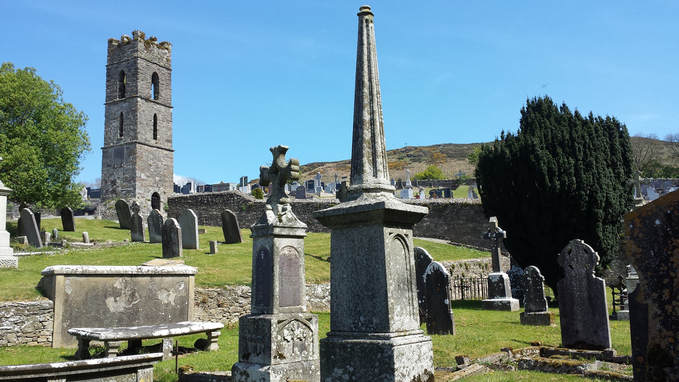 One of the most recognisable structures in Baltinglass is the tower in St. Joseph’s Graveyard on Chapel Hill.  Standing almost alone beside the central pathway, it evokes thoughts of times gone by.  There is a haunting picturesque quality about it.  Familiar as it is, many people have only a vague idea of how it came to be there.  Is it the last remnant of the old church?  Has it something to do with Catholic Emancipation?  Is it part of an old castle?

Today, as you look up the central pathway, the tower is in the middle of the graveyard.  Until 1938, when the graveyard was extended up the hill, the tower formed part of its upper boundary wall.  Further back again, before the area to the left of the central pathway was added to the cemetery in 1903, the tower occupied the north-east corner of the much smaller cemetery.  The lowest part to the right of the central pathway was not part of the grounds before that time either; small houses once stood there.  Before 1903 you would have entered the graveyard through the gateway in what was the south-west corner.  The gate still stands, but like a forgotten old favourite, above its rows of crooked granite steps.  When that gate was in its heyday it was the entrance to the chapel yard.  Directly inside it was the chapel and on the somewhat higher ground to the north was the small cemetery area.  Standing in the corner above the graves and at some distance from the chapel was the tower.  Beside the boundary wall, a narrow flight of steps ran up from the chapel towards the tower.  The steps are still to be seen.

Before the end of the 1820s the tower was less conspicuous, partly because it was not as tall then but also because the chapel obscured its view.  Chapel Hill got its name from this chapel.  When it was built, possibly in the late eighteenth century, the term ‘church’ officially related to a Church of Ireland place of worship.  All other denominations had chapels or meetinghouses.  Throughout most of the eighteenth century the Penal Laws were in force in Ireland.  They were aimed at bolstering the position of the Protestant ruling class and they restricted the religious practices of Roman Catholic and Protestant Non-Conformist denominations.  One of these laws forbade priests from officiating in a chapel with a steeple or bell.  Luke Gardiner’s second Catholic Relief Act, passed in 1782, removed many restrictions on priests and Catholic worship but retained the prohibition regarding a steeple or bell.

Throughout the period of the Penal Laws their enforcement depended very much on the attitude of those in power locally.  By the late eighteenth century most of the laws had been dismantled and those that remained could be flouted in many cases.  It is probably in these circumstances that our bell tower was first constructed.  It was built several yards away from the chapel so that, technically, no law was being broken.  Chapel Hill was an established place-name by 1802 but the chapel may not have been very old by then, as it was called ‘the new chapel’ in a deed of 1799.  The tower may well have been built at the same time as the chapel.

When Catholic Emancipation was enacted in 1829 it removed all remaining restrictions on Catholic worship.  Rev. Henry Young, a charismatic missionary priest, is said to have been responsible for raising funds locally for a new bell, made in Dublin that year.  It is said that at the same time the tower was raised to its present height, with the castellated finish.  The Parish Priest responsible for this was Rev. John Shea, who had been in Baltinglass for over twenty years.

At some stage, not necessarily in 1829, a rectangular plaque was placed on the tower.  At its centre is a cross.  Above that is an inscription in Greek which apparently translates as ‘Glory to God in the highest’.  Below the cross is the very strange ‘Shea Mont Castle’ and below that ‘Anno Domini 1829’.  What exactly was meant by the words ‘Shea Mont Castle’ is uncertain but the inscription is clearly in English and is not an abbreviation of a longer text.  Presumably it relates to Father Shea’s building up of the tower, but it has given rise to the mistaken belief that the tower is that of a castle called ‘Shea Mont’.

In the 1850s, when the present St. Joseph’s church was ready for divine worship, the decaying chapel on Chapel Hill was abandoned.  The clock tower of the new church was not completed until the 1890s.  Up to that point the bell in the tower in the graveyard continued to be rung to summon parishioners to Mass.  The 1829 bell was then transferred to the church in Stratford, where it remained in use until the 1930s.

[First published in The Review 2009: a year in the life of Baltinglass, Bigstone, Grangecon and Stratford]