The Irish Walker Cup Player That Never Was 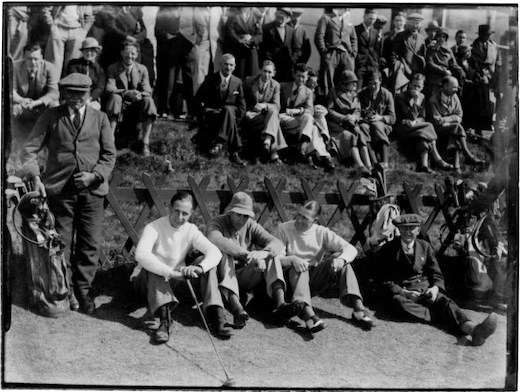 Photo © The University of St Andrews

The 45th Walker Cup match, held in September, saw five Irishmen on the GB&I team for the first time ever.  Gavin Moynihan had already played in the 2013 match, but the first appearances for Dunne, Hume, Hurley and Sharvin brought the total number of Walker Cup players from Ireland to 42.  That number might have been 43.  Lionel Munn, Ireland’s first star amateur golfer, very nearly played Walker Cup in 1934.  What happened this year with Sam Horsfield’s withdrawal was reminiscent of Munn’s story.

When the last two places on the GB&I team were made public on 30 April 1934 the Irish Times commented that the selection committee had ‘sprung a first-class surprise’.  Less than two weeks before the match at St. Andrews the selectors announced that Eric McRuvie of Scotland and Ireland’s Lionel Munn would join the other eight team members already named.  McRuvie, the Irish Amateur Open winner in 1931, had played in the 1932 Walker Cup match, but apparently he had not shown recent form.  Munn was just about to turn 47 and his selection came out of nowhere.

Nevertheless, The Times of London considered Munn worthy of his place.  Referring to his early career before the Great War, it said that he was ‘nowadays an even better golfer than he was then’, adding ‘For sheer devastating accuracy there is not a player in the British Isles who is his master, and he is, moreover, a match winner in excelsis.’

Lionel Munn was born in Clondermot in Derry on 4 May 1887.  He first came to the fore as a 21 year old student at Trinity College, Dublin, when he won the 1908 Irish Amateur Close championship at Portmarnock.  Making his debut that year in The Amateur Championship at Sandwich he reached the third round and went to the tenth tie hole before being beaten.  The following year he became only the second home winner of the Irish Amateur Open, then dominated by the cream of English and Scottish golf.  He retained the title in 1910 and was runner-up in the Irish Close.

1911 was a phenomenal year for the then 24 year old.  Not only did he win the Irish Amateur Close and Open but he added the South of Ireland title.  At the time these were the only three amateur championships in Irish golf.  For good measure he was a member of the Dublin University team that retained the Senior Cup that year and a member of the Co. Donegal team that won the inaugural Barton Shield.  The Barton Shield was then competed for by foursomes pairs representing counties rather than clubs.  Lionel and his brother Ector Munn, playing out of their home club of North-West, made up half of the Donegal team.

Also in 1911 Lionel had his best run in The Amateur Championship to date, reaching the Last 16.  He was selected for the amateur team in the Coronation Match which preceded The Open at Sandwich in June 1911.  The opposing teams were made up of the best amateurs of the then United Kingdom against their professional counterparts.  Munn was the only Irish representative on the amateur team while Michael Moran, his senior by one year, was the only Irishman among the professionals.  In The Open itself Moran finished in a tie for 21st place and Munn in a tie for 40th.

After the dizzy heights of 1911, the following year was an anti-climax.  His best showing was a semi-final finish in the Irish Amateur Open.  In 1913 he played in the first official amateur international for Ireland, against Wales, and won the Irish Close.  In 1914 he won his fourth Irish Close before competitive golf came to an abrupt end as the Great War commenced.  During the conflict Munn served as an officer in the Royal Inniskilling Fusiliers.

It was not till the 1930s that he returned to serious competition.  He won the Belgian Amateur in 1931 and 1932.  In 1932 he also reached the semi-finals of The Amateur and finished in a tie for 29th in The Open, but there were no significant results the following year.  Living in Kent, he did not compete in Ireland and was not selected to represent Ireland.  Not surprisingly, therefore, his announcement for the 1934 Walker Cup team raised eyebrows.

Two days before the match was to begin Munn was practising on the Old Course, but apparently his form was not impressive.  He left St Andrews before the announcement was made that ‘owing to disposition’ he had withdrawn.  With the agreement of Francis Ouimet, the American captain, his place had been filled by Leonard Crawley.  As with Horsfield’s withdrawal 81 years later, no further official explanation was given for Munn’s decision.

Just ten days after the match Munn competed in The Amateur Championship at Prestwick.  The Irish Times reported that he was ‘still suffering from the cold which had forced his withdrawal’ and that ‘his voice was husky’ when he spoke to the reporter.  He won three matches in the championship to reach the Last 32 and was beaten 3/2 by the eventual winner, Lawson Little, a member of the US team.

Lionel Munn went on to play for Ireland in the 1936 and 1937 Home Internationals, and to reach the final of The Amateur in 1937, again at Sandwich.  The 50 year old Irishman was beaten by Robert Sweeny, another American.  Munn later retired to Kerry where he died aged 71 on 25 October 1958.  Whether the cause back in 1934 was a cold, poor form or an atmosphere of criticism, it was ultimately Munn’s choice to not be among Ireland’s Walker Cup players.