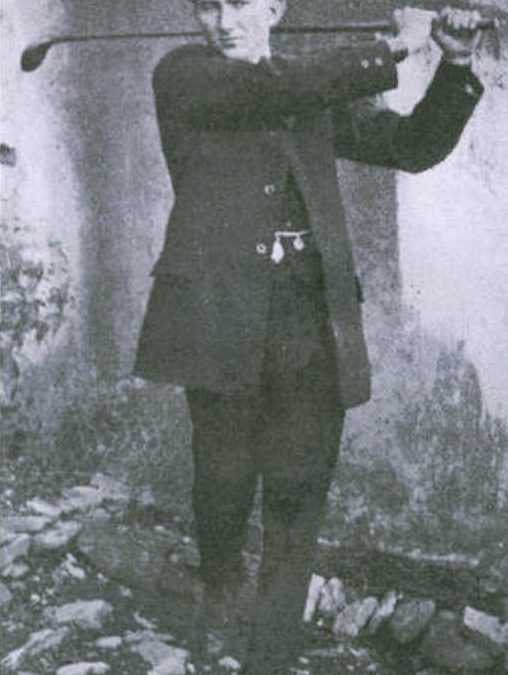 Mark Frost’s 2002 book The Greatest Game Ever Played (later made into a film) is a somewhat fictionalised account of the 1913 US Open at Brookline, where the American amateur Francis Ouimet beat Harry Vardon and Ted Ray in a play-off.  Hidden in the background of this drama was a significant first for Irish golf.  It was provided by Pat Doyle, a recently arrived Wicklowman.  He became the first Irish-born golfer to complete all four rounds in the US Open.  He did so in style, finishing in 10th place, seven shots behind Ouimet, Vardon and Ray.

Pat Doyle was the first Irish-born professional to make a mark in American golf but over the next decade and a half others followed.  Only in recent years have these pioneers of the professional game in the USA been remembered in their homeland.

Patrick Joseph Doyle was born on 10 March 1889 in Kindlestown Upper, between Greystones and Delgany, Co. Wicklow, to Darby and Mary Doyle.  His father was a labourer who died of pneumonia when Pat was eleven months old.  Pat grew up in the Delgany area, living with his mother and two older siblings.  In 1905 his sister Mary Anne married Edward Darcy from nearby Belview.  Some 47 years later her grandson Eamonn Darcy was born.  He went on to be one of Ireland’s most successful golfers and a Ryder Cup star.

By the time Pat Doyle had entered his teens Greystones Golf Club was providing casual employment as caddies for many local youngsters.  Several of these graduated to pursuing a career in professional golf.  Pat was one of them.  In 1908 a second club opened in the area.  Delgany Golf Club claims Pat Doyle was its first professional.  This is quite possible, as he was aged 19 at the time, but two years later he was attached to King’s County & Ormond (now Birr) Golf Club.  In 1911 he was attached to the short-lived Finglas GC in Co. Dublin and the following year he was playing out of the Atlantic GC at Kilbrittain, near Bandon, Co. Cork.

His first significant impact as a tournament player was in the Irish Professional Championship at Royal Dublin in June 1910, when he finished 5th.  In May 1912 this event was played at Castlerock and Doyle finished runner-up, albeit six strokes adrift of the winner, the then all-powerful Michael Moran.  Had Pat Doyle stayed in Ireland he might well have won the Irish Professional Championship several times over or, like Moran, he might have enlisted in the Army and perished in the Great War in Flanders.  But Doyle chose to cross the ocean to seek a career on the fast-developing American golf scene.

He arrived in the USA for the first time on 30 April 1913 and went to Massachusetts, where he became professional at the Myopia Hunt Club, north of Boston.  He had a few months to settle into his new position before the US Open was held in September.  While the focus of attention was on the 20 year old American Ouimet slaying the British giants Vardon and Ray, the 74 recorded by Ouimet in the third round was only the second best of the day.  The 24 year old Irishman Pat Doyle produced a 73.  This brought him from nowhere to a tie for 8th place.  Eventually he claimed 10th position on his own.

He resigned his post with the Myopia Hunt Club about November 1915 and remained ‘unattached’ till the early summer of 1916, when he went to South Shore Field Club on Long Island, New York.  Playing for his new club, in June 1916 at Brae Burn he finished in a tie with the Irish-American Mike Brady for the Massachusetts Open.  Due to heavy rain, their play-off was delayed till 10 July, when Doyle had a disastrous round and lost by fifteen shots.

Rain featured again in Doyle’s career when it caused the first two rounds of the 1918 Philadelphia Open at Huntingdon Valley to be abandoned.  The tournament being reduced to 36 holes, Doyle and Arthur Reid finished in a tie and were declared joint champions.  This was the first recorded win by an Irish professional outside Ireland and it was to be Doyle’s only tournament victory.  By then he was attached to Deal Golf & Country Club in New Jersey.

In 1919 Pat Doyle finished tied for 18th place in the US Open at Brae Burn.  Later that year he and Tom Boyd became the first Irish golfers to qualify for the match play stage of the US PGA championship.  Both were beaten in the first round (Last 32).  While he featured prominently in tournaments over the following few years and made the cut in the US Open another three times, his playing career slowly petered out.

In 1926 he had his best showing in the US PGA championship.  Then attached to Elmsford, north of New York City, he got to the quarter-finals, losing the 36-hole match by 6/5 to Walter Hagen, the holder and eventual winner.  Doyle’s last performance of note came in 1928, when he got to the Last 16 of the US PGA.  On this occasion his progress was ended on the final hole by Jock Hutchison.

Pat Doyle lived most of his life in the New York area.  His wife Catherine was an Irishwoman whom he married in the late 1910s.  He died at the age of 82 at Mount Vernon Hospital on 29 March 1971.  At the time his 18 year old grandnephew Eamonn Darcy was about to start his first season as a touring professional.